Gunshots And Lockdowns: When Nearby Gun Violence Interrupts The School Day

In the daylight hours of a recent Wednesday afternoon, a 33-year-old man was shot and killed in Southeast Washington, D.C., just a short walk from where children at Savoy Elementary School were in their afternoon classes. Hendley Elementary School, roughly a mile away, was recently hit by bullets, reportedly for the second time in a month.

These gunshots, and others like them, occurring in close proximity to grade schools, are a fairly routine occurrence for many students in Washington, where a Guns & America analysis found dozens of shooting incidents within 1,000 feet of a school campus in the 2016-2017 school year.

At least 84 school campuses in the District of Columbia experienced one or more gunshots within 1,000 feet of their campus during the school day in the 2016-2017 school year, according to data gathered by the ShotSpotter gunshot detection service and analyzed by Guns & America. This does not include areas in the city with no ShotSpotter data available.

Five D.C. campuses, all with elementary-aged students on the premises, experienced at least 10 shootings during the 2016-2017 school year. 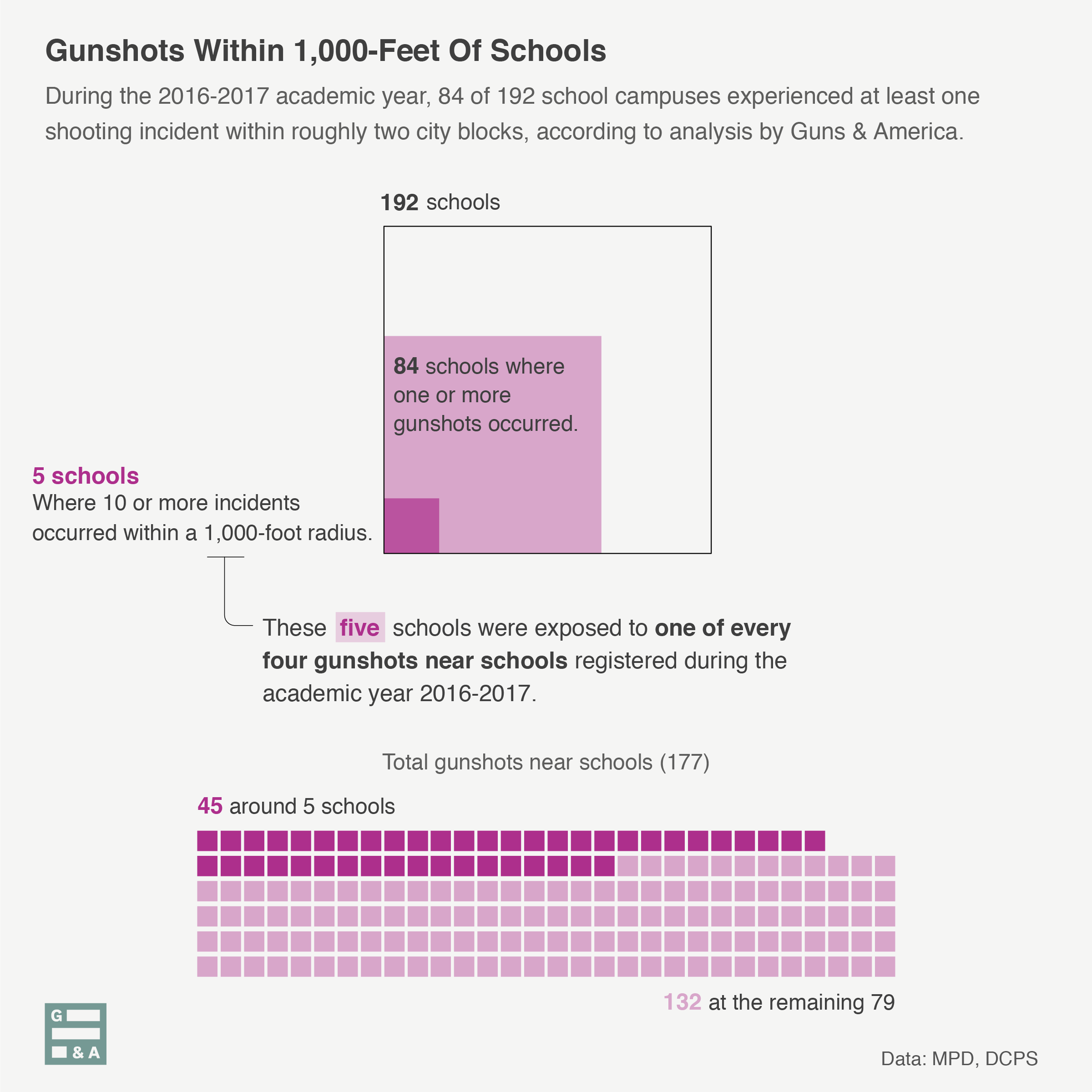 Royston Lyttle is a principal at Eagle Academy at Congress Heights, one of the five schools found by the Guns & America analysis to have had at least 10 shootings during typical school hours in the 2016-2017 academic year. When these incidents occur, school faculty are notified either by staff or D.C. police and will shelter in place or go into a full lockdown, which effectively shuts off the school to the outside world until the situation is contained.

“The kids are terrified,” Lyttle said. “You hear them say, ‘Is the gunman coming to get me?’”

Eagle Academy has become all too familiar with gun violence over the years. A few years ago, a student’s father was gunned down just outside school gates where the child was inside.

“It’s scary. It’s scary when you go outside to do carpool — picking the students out of the car and putting them back in at the end of the day,” Lyttle said. “Staff will not say that they’re scared, [but] I know they’re scared because I’m worried.”

Research has shown that routine exposure to violence has an adverse effect on students’ ability to learn. And lockdowns amid neighborhood violence can be anxiety-inducing for both students and staff.

Specifically, African American children who grow up in poverty are found to be significantly more likely to experience the type of traumatic life events that lead to poorer test scores, lower reading levels and less proficient math skills than their more affluent counterparts.

“These kinds of symptoms really manifest themselves a lot in the classroom,” said Lisa Jaycox, a clinical psychologist at the RAND Corporation think tank.

“The kind of recurrent thinking about their loss or their trauma makes it makes it hard to learn.”

An analysis of ShotSpotter data published by D.C.’s Metropolitan Police identified 286 shootings in the city during the 2016-2017 school year.

ShotSpotter uses acoustic sensor technology to detect and track gunshots and reports in real-time to MPD.

All of the firearm incidents counted in the Guns & America analysis occurred from 7 a.m. to 6 p.m. Shootings that happened during weekends, holidays and scheduled half-days for students were excluded.

Of the 286 shootings counted by police, 177 were within an 1,000-foot-radius of a school campus. The Guns & America analysis excluded schools focused on adult education, night schools and juvenile detention learning centers, leaving 192 schools, including some with more than one school on campus, in the Guns & America count.

Of those 192 schools, 84 experienced a shooting incident in close proximity — 1,000 feet — to their campus. Five schools, most of them elementary schools, saw 10 or more during that school year.

The shootings, according to ShotSpotter data, were concentrated in three ZIP codes: 20032, 20019 and 20020, east of the Anacostia River. Eighty-two percent of the firearm incidents near schools happened in those three areas, where most of the population is African American. 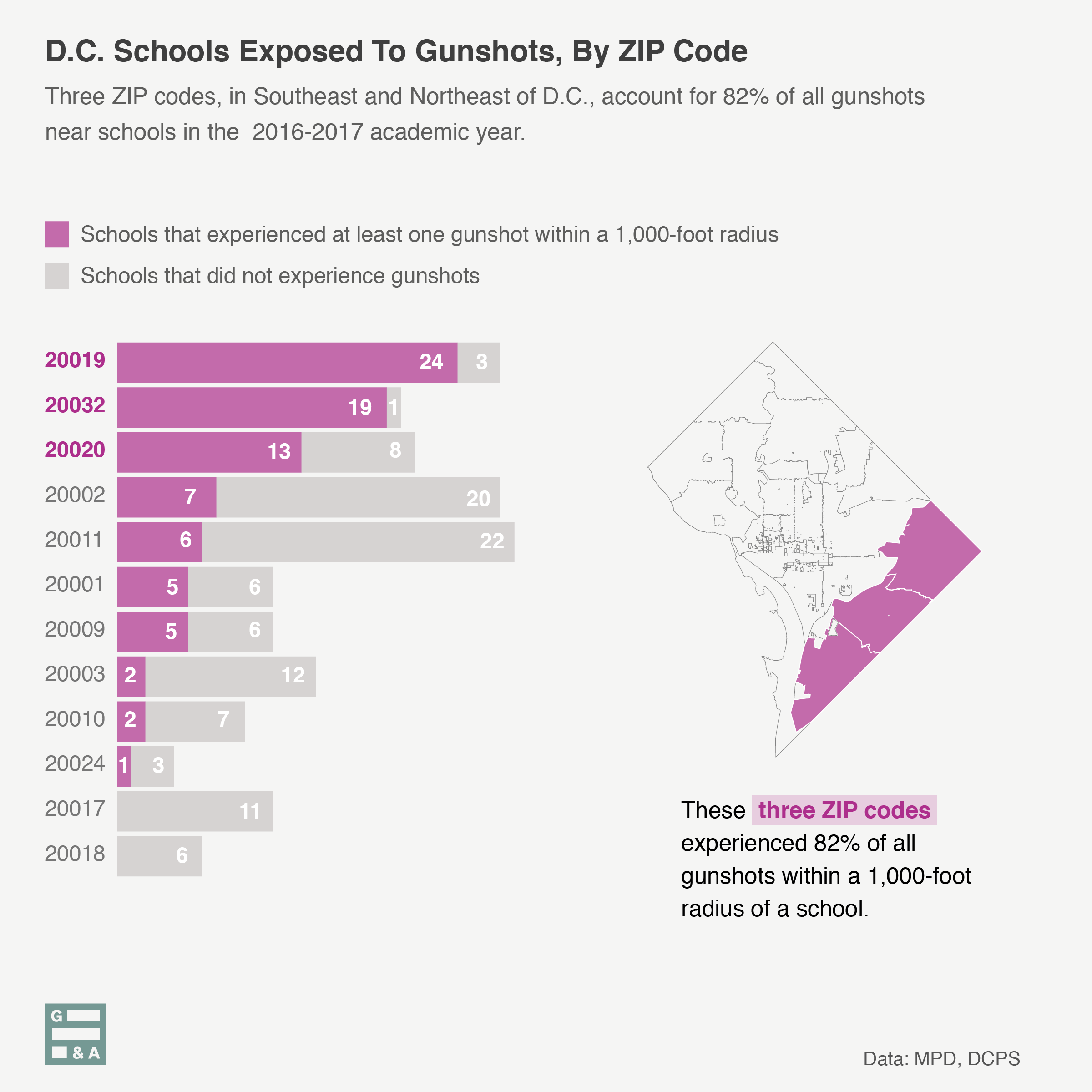 Three ZIP codes experienced 82% of all gunshots within a 1,000-foot radius of a school in Washington, D.C.

‘Almost Desensitized To It’

When a shooting occurs near a school, faculty are typically alerted by police or a member of the staff that there is possible danger. Depending on the severity of the situation, schools might direct staff and students to shelter in place or go under lockdown, which shuts down all in and out traffic to the campus and freezes classes in place until faculty is notified by police that the incident has been resolved.

“It’s to a point that there were so many [lockdowns] last school year and the beginning of this school year that students are almost desensitized to it,” said Maisha Riddlesprigger, principal of Ketcham Elementary School.

Students have gotten so used to the lockdowns, Riddlesprigger said, that they automatically associate the procedure with likely violence outside school doors.

“They’re like ‘Oh, we’re in another lockdown. They may be shooting,’” Riddlesprigger said.

To combat the negative impact of routine distress, some schools are taking a “trauma-informed” method to their teaching, in which staff are trained to better understand how to help students cope with stress and minimize its impact on their academic performance.

“We’re trying to disrupt the cycle of student misbehavior that is impacted by trauma,” said Riddlesprigger.

Washington police say that while there is not a specific protocol for shootings that happen near schools as opposed to within them, officers work with faculty to keep them informed.

“We respond to all shootings pretty much the same, with the exception of a school shooting,” said MPD Assistant Chief Robert Contee. “A call comes in for a shooting, or a shooting is detected on our ShotSpotter equipment, and that initiates a response from law enforcement.”

“When you talk about shootings that take place near our schools, I think that that’s really a game-changer because you’re talking about children,” Contee said. “If it’s my child that’s attending the school, I would hope that that’s something that shocks the conscience of people.”

School resource officers are often a first response for schools when there is potential violence outside their doors, said Sundai Riggins, principal of Hendley Elementary School.

“The school resource officer is very helpful because we can make a determination in the moment and prevent further traumatizing my community, because we’re not going to hold on lockdown if the lockdown is not what is needed,” Riggins said.

Hendley works with education research group Turnaround for Children to train its teachers to support students with trauma. Principal Riggins has also found other ways to help her students avoid some of the limitations imposed by gun violence in the neighborhood.

She says the school tries to give kids extra recess or play time in a protected, enclosed space. She also has created football, soccer, track and basketball teams, as a way of giving the students some safe outdoor time, as many parents are afraid to send their kids outside.

Data about gunshots in Washington, D.C., for 2016 and 2017 came from Open Data D.C., a website run by the District of Columbia.

The schools dataset was created based on data sent by the District of Columbia Public Schools (DCPS), but also based on the charter and public schools’ equity reports for 2015-2016 and 2016-2017 published by the Office of the State Superintendent of Education.

Limitations of the data

The data published by Open Data D.C., and generated by ShotSpotter, have a margin of error of roughly 328 feet “due to privacy concerns.” The acoustic sensors that detect the gunshots don’t cover the whole city and targets “high-population density areas with frequent sounds of gunshots incidents.” The D.C.’s Metropolitan Police (MPD) didn’t disclose the actual area of coverage.

You can find a final version of the data here.

The analysis only includes incidents that occurred during the DCPS 2016-2017 academic year (excluding the summer), on weekdays and from 7 a.m. to 6 p.m. All the incidents during holidays and half-days are not included.

Schools that focus on adult education, night schools or juvenile detention learning centers are excluded. According to an analysis of three years of ShotSpotter data, there were no firearm incidents registered in part of Northwest D.C. It’s unclear whether this is because of the lack of these incidents or the absence of acoustic sensors in the zone. As a result, the schools in that area of Northwest D.C. are also excluded.

To identify the number of gunshots near schools, Guns & America used a technique known as “buffer” that allowed us to create a 1,000-foot radius circle around each school in the dataset using the latitude and longitude.

With the software R, it was possible to count the number of gunshots inside that area. To calculate the total number of firearm incidents near schools, and for each ZIP code, the software QGIS was used.

At least seven people were killed and another 20 were injured in a mass shooting that stretched in and around Midland and Odessa, Texas, Saturday. The incident was the second mass shooting in that state in less than a month, following a shooting in El Paso, on Aug. 3.

Update, 6:20 p.m. ET: This story now includes additional language about the types of ammunition Walmart will no longer sell.

Walmart announced Tuesday that it will discontinue sales of ammunition designed for handguns and military-style rifles such as the AR-15.

The company will also stop allowing customers to openly carry firearms inside its stores, and called on lawmakers to consider passing new gun control legislation.

At a press conference Sunday in Odessa, Texas, FBI Special Agent in Charge Christopher Combs said that the nation is now averaging an active shooter incident “every other week,” a broad term used by the FBI to describe someone “attempting to kill people in a populated area.”

Not all of these incidents escalate to the level of a mass shooting.

Acrid gun smoke clouded the sunny entrance of a Texas church on a recent Sunday.

Seven men wearing heavy vests and carrying pistols loaded with blanks ran toward the sound of the shots, stopping at the end of a long hallway. As one peeked into the foyer, the "bad guy" raised the muzzle of an AR-15, took aim and squeezed the trigger.

From Pain To Purpose: 5 Ways To Cope In The Wake Of Trauma

Could it happen here? It's a question a lot of people ask in the wake of a traumatic event.

Even if you're not directly connected to the events in El Paso, Gilroy or Dayton, chances are you've felt the weight of them.