The Travis County sheriff’s new immigration policy goes into effect today. The policy limits what information local law enforcement share with the federal immigration agency, and it's already stirred up a lot of controversy.

This morning, Gov. Greg Abbott came through on a pledge to cancel $1.5 million in criminal justice grants from his office to Travis County over the policy.

So, what is this new policy from Sheriff Sally Hernandez, anyway?

She has directed deputies and staff of the Travis County Sheriff’s Department to not honor most warrantless requests from the U.S. Immigration and Customs Enforcement (ICE) to extend the detention of people booked into the local jail. If there’s no warrant, the sheriff’s policy agrees to detain only those charged with murder, aggravated sexual assault or human smuggling.

Within days of making her policy public, Hernandez became the target of condemnation from Abbott, who argued her policy is a threat to public safety.

Hernandez contends her policy fosters trust between community members and local law enforcement. She told KUT’s Nathan Bernier last week that, without the new policy, victims or witnesses of crimes may not call police to report crimes because of fear of deportation.

In a letter to county officials, Abbott promised to cut state grants to the county once the policy went into effect, a promise he came through on this morning, when he announced he would cut funding of criminal justice grants to Travis County. In Abbott's letter, he initially stated his office would block $1.8 million in funds, but the county has already claimed $300,000 of the grants, which use discretionary funding from Gov. Abbott's Criminal Justice Division. (You can see a full breakdown of where those funds go in Travis County below.) 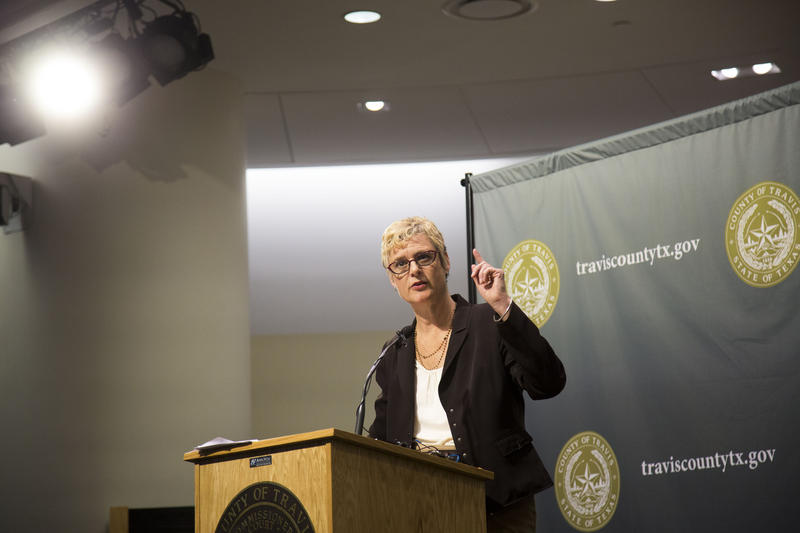 At an event this afternoon, Travis County Judge Sarah Eckhardt said the cuts were "retribution" for the  policy and said she'd like to see the funding restored.

Last week, Abbott also directed his office’s budget director to account for all funds – state and federal – allocated to the county through the governor’s office.

A bill that's up at the state Legislature could also codify that policy going forward. Senate Bill 4 would cut state grants to local jurisdictions that do not honor all ICE detainer requests. The first public hearing on that bill is tomorrow morning at the Capitol.

In yesterday’s State of the State address, Abbott said passing a sanctuary city bill is one of his top priorities.

Where Does Your Member Of Congress Stand On Trump's Executive Order?

Gov. Greg Abbott delivered his State of the State address in the House chamber on Tuesday. Reporters at KERA and other public radio stations across Texas have annotated his remarks.

Gov. Greg Abbott spoke for almost an hour Tuesday in his “State of the State” address. Almost as notable as the contents of that speech were the hot topics he didn’t mention.

The 10th Amendment, the Tea Party and sanctuary cities are three things that one wouldn’t imagine having much in common. But they do – perhaps now more than ever.

A few years ago conservatives pointed to the 10th Amendment, which safeguards states’ rights, as a bulwark against orders from the Obama administration.