It’s been nearly two weeks since Texas officials released a list of 95,000 people on the state’s voter rolls who they suspect might not be citizens. Since then, election officials in Travis County have been vetting the state’s list. The process has been tedious and complicated – and there's no telling when it will end.

Amanda Katzer is a business analyst working for the Travis County Tax Assessor’s office, which is also the county’s voter registrar office. Katzer, along with a handful of other Travis County employees, has investigated hundreds of names on the state’s list.

Texas Secretary of State’s office flagged 4,558 names for Travis County. Katzer and several other people in her office have been combing through that list in an effort to find names that were erroneously included by state officials.

She has two big computer screens – on one there’s the state’s list; on the other, the county’s voter database. So, when she gets to a name, she types it into the county’s database and looks through that person’s records.

"We can tell that this person has been registered since 2016, so a little while here," she said. "I can clearly see that they did check ‘yes’ that they are a United States citizen."

Katzer then clicked on some scanned documents attached to the voter’s record.

Unlike many states, Texas’ voter registration process requires that everything be done on paper. So, Travis County officials have to scan handwritten documents and then later try to decipher them.

"I can also tell that this application came from Bexar County from one of the naturalization ceremonies," Katzer said. "So, we make note of that in the spreadsheet, because that’s one of the things that could clear them from the list."

That means Katzer found a name on the state’s list that should not be there. This particular person was naturalized and is currently a citizen who is eligible to vote.

By early this week, Katzer and others found more than a thousand names that should be cleared from the state’s list.

Gretchen Nagy, Travis County’s voter registration director, said her office had gone through two-thirds of the state’s list so far and it’s been hard work.

The hardest part has not been plugging names from one database into another, she said, it's been figuring out where to get this citizenship information to cross-reference in the first place. Nagy said her office has already been able to clear hundreds of names attached to naturalization ceremonies in Travis County and Bexar County, which shares naturalization data with Travis County.

But that’s just two places where people could have been naturalized. Naturalization ceremonies happen all over the state and all over the country, too – and people move to Texas and within Texas every day.

"We are finding out it is really hard to do," he said.

Elfant said he wants to find a bigger list to cross-reference with the state’s list of voters. 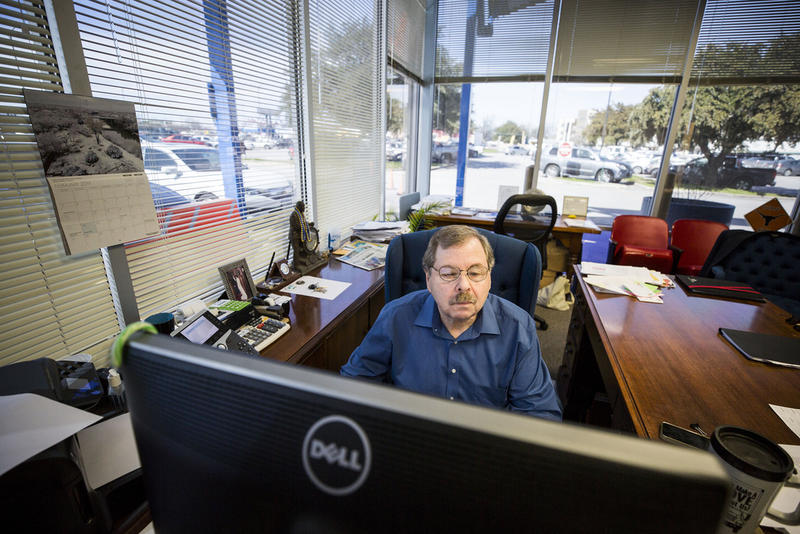 "We are trying to find access to a governmental database of citizenship data," he said. "So that we can at least get this list down to a manageable number, where we can do more investigations."

Elfant said he and other local election officials have been on their own figuring out how to verify the names of people the state suspects might not be citizens.

"We are having to investigate thousands of these without having the benefit of having a database where we can determine citizenship," he said.

Before the 2012 election, Florida officials tried a similar effort to remove suspected noncitizens.

Florida’s Republican governor at the time, Rick Scott, accused more than 180,000 people on the state’s voter rolls of being noncitizens.

Ion Sancho, who was a local supervisor of elections in Florida during this time, said he was immediately skeptical.

"When… Gov. Scott came in with this claim that there are all these illegal registrants, the state’s supervisors of elections knew that was a false claim," Sancho said. "When we looked at this and identified that the overwhelming majority – that 90 percent of the people that they identified as 188,000 illegal immigrants – were in fact legal citizens of the state of Florida."

At the time, state officials blamed their faulty list on the federal government.

They wanted to create a better list by cross-referencing Florida’s voter rolls with a federal database of noncitizens receiving benefits called the Systematic Alien Verification for Entitlements, or SAVE.

Sancho said using that database was a bad plan.

"It was not, in fact, designed to be utilized for cross-referencing with any other data list," he said.

Florida never got access to that database, and the state’s noncitizen voter purge was eventually halted because there wasn’t another database to use.

"There is no single database in the United States for individuals who have green cards or any other ineligibility," Sancho said.

So, Elfant’s hope of a big federal database that will make his job easier probably doesn’t exist.

Sancho said Texas officials should have made sure their list was at least 90 percent accurate before handing it over to election officials, publicly releasing it and sending names to Texas Attorney General Ken Paxton's office.

"They did no apparent test to see what the error rate was of the data they were using," Sancho said. "They just went hog wild and released raw data."

Because local governments in Texas run their own elections, the state’s effort to remove alleged noncitizens from the voter rolls is playing out differently in different counties. Some officials have started sending out letters to people on the state’s list, while election officials in most major cities, like Austin, are vetting the list first. Elfant said other county officials are just waiting for the state to come out with a more accurate list.

Voters and voting rights advocates have also sued the state in federal court, alleging officials are violating the Voting Rights Act. Plaintiffs are asking judges to stop the state's effort to remove voters from the rolls.

Elfant said his office would keep vetting this information, even if it takes weeks or months.

"The attorney general made a very serious allegation of voter fraud in the state," he said. "I think it is very important to determine whether these people are citizens or not. And if we have issues, we will deal with them. And if we don’t have issues, we really need to call this out for what it is."

David Whitley Apologizes For How He Rolled Out Voter Citizenship Review. But He Still Supports It.

Facing an uncertain path to confirmation after ordering a deeply flawed voter citizenship review that seemingly focused on naturalized citizens, Texas Secretary of State David Whitley is now apologizing to state lawmakers for the way his office rolled out the review — but he is still holding firm behind the overall effort.

AG's Office Told Lawmakers It Isn't Investigating Flagged Voters. It Told A Local Official It Is.

Texas' election chief on Thursday defended giving prosecutors a list of 95,000 potential noncitizens on the state's voter rolls before vetting the information, which turned out to wrongly include scores of people who were naturalized before casting legal ballots.