During the years after the Civil War, communities of African Americans worked together throughout southeastern Texas to form what historians call freedom colonies. Research underway at Texas A&M University in Bryan-College Station aims to identify and preserve these historic black settlements.

Andrea Roberts teaches urban planning at Texas A&M University in College Station. She began the Texas Freedom Colonies Project during her doctoral studies at the University of Texas.

Roberts explained that “anchor sites” were at the core of life in these settlements.

“That’s a building or an institution at the center of the community, which might be a school or a church, and sometimes all that remains of the areas is cemeteries,” she said.

She said these settlements were designed to exist apart from a society dominated by people hostile to African Americans.

“Freedom colonies are really inclusive of these intentional black communities, not where people were pushed, not where they had to live by default because no one else wanted to live there necessarily, but where black people intentionally engaged in what we now call 'place making.’ ” Roberts said.

Sarah Gould, a San Antonio historian, said most of these communities were built in rural areas, running up and down the Texas Gulf Coast and into the Piney Woods. Other communities hugged what was at the time the outer rim of cities like Houston, Austin and San Antonio.

“So they really needed to be self-sufficient. And that was the goal. They wanted to be away from areas where they could potentially be victims of violence, of persistent types of prejudice and discrimination,” Gould said.

“So even though, rightly so, all that is left is a cemetery or all that is left is an old Rosenwald School, for example, very often there are [active] churches nearby where there are clusters, three or four different colonies, six different colonies, that all return every year. So this is not a forgotten ghost town and the story is over,” Roberts said. 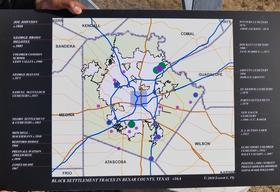 In fact, in many cases, that story is just beginning.

Fly joined a work crew one early morning to clear the brush from the Hockley Family Cemetery, an abandoned site connecting three freedom colonies on San Antonio’s West Side.

“There’s a post, and there’s a post,” he said, “and when you measure, they are 13 feet apart, and that’s just wide enough to get a wagon through or a truck through, so my theory is this is the original gate.” 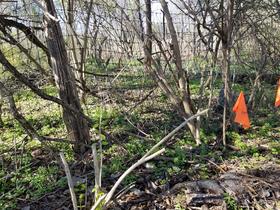 The cemetery is located down a narrow alleyway in between a row of homes and an elementary school.

“Using my field experience from cemetery, I knew there had to be a boundary, fence post, etc., and markers," he said. “But we know the markers [and] the headstones had been vandalized. So when we started, you couldn’t even walk in this far into the cemetery.”

Fly sifted through historic land deeds, spoke with families and studied the physical markers at the site. He was sure this was the Hockley Family Cemetery, a touchstone for many communities from the late 1800s to early 1900s.

The cemetery itself was roughly the size of a football field. He and his crew marked the grounds with over 160 flags as they located possible gravesites.

She said she hopes her research and documentation of these historic sites she will help African-Americans in Texas reclaim parts of their unrecorded history and also help them appreciate their responsibilities to their own cultural history.

“So it’s my intention in studying these places not to study as some romantic idea in the past, but to talk about our accountability to these communities in the present,” Roberts said.

She also wants her work to inform and empower local and state political leaders as they develop plans for these communities, especially those impacted by severe weather like hurricanes.

Ryan Poppe can be reached at RPoppe@TPR.org and on Twitter at @RyanPoppe1.

'Little Egypt,' A Nearly-Lost Freedmen's Town In Dallas, Resurfaces Thanks To College's Digging

Texas is dotted with Freedmen’s communities — African American neighborhoods that sprouted after the Civil War in the era of segregation. They range from Ellis Alley in San Antonio to the Fourth Ward in Houston to Deep Ellum in Dallas. Another one in Dallas that's been nearly forgotten, Little Egypt, is getting a renewed look thanks to Richland College.

Though Houston and Harris County make up one of the most ethnically and racially diverse metro areas in the country, that hasn't always been reflected in its judges. But the region recently took a big step towards representation when it elected an additional 17 African-American women to the bench, bringing the total number of African-American women judges in the county to a record 19.

How The Green Book Guided Black Travelers Across Texas And Beyond

From the Great Depression through the Civil Rights era, "The Green Book" travel guides were issued every year to help African-American drivers safely explore the country — and Texas.

Virginia lawmakers have been embroiled in racial controversies after both the governor and the attorney general admitted to instances of dressing in blackface for parties in the 1980s.

Texas was a very different place two centuries ago. It was home to roaming tribes and just a few permanent settlements. Researcher Sam Haynes of UT Arlington says it was the most diverse place in North America.