Tuesday night, President Trump stands before a joint session of Congress, assesses the state of the union and likely makes another case for more than $5 billion in funding for a wall on the U.S.-Mexico border. Trump has said he'd be willing to shut the government down again if the funding doesn't materialize.

But money has already been allocated for some border wall projects, including a 6-mile stretch of wall in South Texas' Rio Grande Valley.

Construction begins this month in Hidalgo County. On Monday, protesters gathered in Mission, Texas to march against the wall.

About 40 people, including members of the Carrizo/Comecrudo tribe, gathered in front of a white church in Mission in Hidalgo County. Some held flags representing their tribes. And not all were Texans. Some traveled to Mission from as far away as Ohio and South Dakota to join the demonstration.

Native Americans in the Mission region see the project as a threat, first and foremost, to their cultural and spiritual history.

Juan Mancias, tribal chairman for the Carrizo/Comecrudos, said his people once had villages all along the Rio Grande.

“They haven’t consulted with us because we’re the original people of this land. We have the inherent right to this land." he said. "And those people who have came in afterwards, they really don’t know where the villages are.”

Ava Leal walked hand-in-hand with her 9-year-old daughter. Her husband carried their other child. They saw this event as a learning experience for their children.

“For us, it’s a religious thing and that being engaged and active in their community," she said. "That’s a power that they have from a young age, and also it teaches them that their voice matters just as much as everyone else’s.”’ 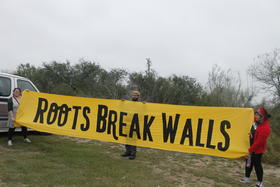 The Leals said they've lived in the Rio Grande Valley for more than a decade. Ava Leal is a member of the Haudenosaunee (High-Den-In-Show-Nee) tribe, and her husband is with the Carrizo/Comecrudo tribe.

Kat Christen was one of the non-Texans at the protest. She is from Ohio, where she'd seen Mancias give a speech. She said he inspired her to travel to the Valley to understand the situation for herself.

“We’re just hearing such a different story up north," she said. "There’s like a lot of fear around it, kind of justification for things when I get down here are not actually happening and that there’s not really a need for a wall."

The demonstrators prayed and sang songs, and then they marched three miles to the National Butterfly Center. Protestors fear the new wall will run right through this 100-acre wildlife preserve, leaving more than half of the butterfly center’s land on the other side.

Marianna Treviño-Wright, executive director of the National Butterfly Center, said a law enforcement officer said they would no longer have access to their land south of a levee that runs through the Butterfly Center’s property.

She said she was also informed that, effective Monday, all of this was federal land, which surprised her.

But, she added, the confusion doesn't surprise her. She’s had trouble learning from government and law enforcement officials about what exactly is going to happen on her land. She said she filed a lawsuit against the federal government, but it’s gone nowhere. 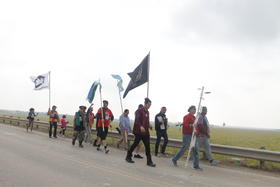 The marchers ended their procession at the top of a levee at the Butterfly Center, and they sang and prayed again.

Mancias, the Carrizo/Comecrudo tribal chairman, said he plans to build camps all along the construction site.

The contract to build this section of wall was awarded to a Galveston-based company last fall. According to Customs and Border Protection, it will be concrete and topped with with 18-foot steel poles. One hundred and fifty feet of of land will be cleared on either side.

Customs and Border Protection did not immediately respond to Texas Public Radio’s request for comment on the construction timeline for the wall or about Mancias’s concerns over the preservation of any artifacts unearthed during the project.

Reynaldo Leanos Jr. can be reached at reynaldo@tpr.org or on Twitter at @ReynaldoLeanos

From Federal Workers To A 6th-Grader Named Trump: State Of The Union Guests To Know

The most important political issues of the past year will be on display Tuesday night, not only in what President Trump says in his State of the Union address but in who will be in the audience.

Furloughed federal workers, Border Patrol agents, immigrants, school shooting survivors and the first inmate to benefit from a new criminal justice law will be among those to gather in the chamber of the U.S. House.

President Donald Trump is scheduled to deliver his 2019 State of the Union address at 8 p.m. Central on Tuesday, Feb. 5.