60 Years Ago, Resistance To Integration In Texas Led To School Voucher Plan

The Texas Senate Education Committee plans to discuss a bill next week that would allow parents to use taxpayer dollars to send their kids to private schools. The school voucher program is cited as a way to give students — especially low-income students — access to high-quality schools.

This isn't the first time lawmakers have tried to pass a school voucher bill; lawmakers have introduced some kind of modern-day voucher program for at least 20 years.

But vouchers have a history in Texas that dates back to school integration. And it's not pretty.

After the Supreme Court’s Brown v. Board of Education decision in 1954, Texas was resistant to desegregating its public schools. Then-Gov. Allan Shivers appointed a committee to recommend ways to prevent integration. One proposal created a school voucher program that would give parents who opposed integration taxpayer money to send their children to a segregated private school.

“Such aid should be given only upon affidavit that the child was being withdrawn  from the public schools due to the parents' dislike of integration.”

The voucher proposal was part of a larger group of bills filed to circumvent desegregation, but the bill never passed.

“It was my father and state Sen. Abraham ‘Chick’ Kazen from Laredo, and they had placed everybody on notice that they would be opposing any Jim Crow laws," former U.S. Rep. Charles Gonzalez said. In 1957, his father, Henry Gonzalez, was the first Hispanic state senator in Texas, representing San Antonio. He later became a congressman. Then-state Sens. Gonzalez and Kazen filibustered the bills targeting desegregation for 36 hours, setting a state record. 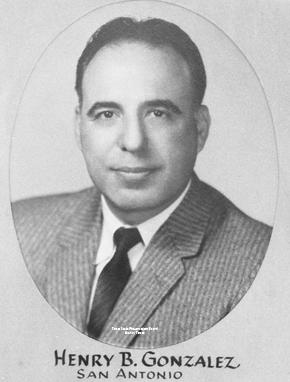 “My father really believed, obviously, government was for the people and by the people, and he just thought it was a real perversion that the state would being using tax dollars to promote segregation, which meant denying equal opportunity to all children in the state," Gonzalez said. His father died in 2000.

“What I think is the most tragic aspect of what they're trying to do is present this as the civil rights issue of our times and turn this whole argument on its head and saying, 'You are giving the disadvantaged, you are giving the minorities an opportunity they wouldn’t have otherwise," he said. "I can assure you that you will reach many, many more minority families and disadvantaged families through a quality education provided in a public school.”

Ann Beeson with the Center for Public Policy Priorities said as Texas’ demographics change, "you see the resurgence of these ideas that were very overt back in the 1950s and that led to the idea of school vouchers. You see that coming back in a way that’s veiled as, ‘Oh we’re giving choice to parents,’ but is really an underhanded effort to give options to white parents so that their kids don’t have to go to school with children of color.”

Beeson said the Senate bill allows all families to use vouchers, not just low-income families. And that, she said, will further segregate public schools.

"Because it enables wealthier families to get vouchers, but doesn’t provide enough money to actually cover the cost of private school tuition for a low-income family. What you’re going to see is that impact of vouchers would be to further expand educational inequities between children of color and white children in Texas,” she said.

At a Texas Tribune symposium on public education earlier this month, Melvin Ehlert, a school board member from Brenham, Texas, drew applause when he asked lawmakers this question:

Senate Education Chairman Larry Taylor disagreed with the idea that vouchers have anything to do with race.

“The school choice has been going on for 20 years and other states have it, and frankly, I think you’re misunderstanding the people benefiting from it,” said Taylor, who has sponsored school voucher legislation for the past two sessions. “If you look at other states, a very high percentage of the people who are participating are minorities, and they are leaving schools that they’ve been trapped in.”

"It’s one of the things I cannot explain," Taylor responded. "I think it has something to do with teachers unions; it doesn’t make sense. The people who benefit from these programs ... are high percentages of minority students, and they are getting a much better opportunity than they were having before.”

But studies, including a 2015 study from the University of Texas, show that vouchers don’t improve student achievement very much. Another study found that low-income students who use vouchers transfer schools at about the same rate as all students in low-income schools, with or without vouchers. That raises questions about how effective vouchers can be at improving student success.

Meanwhile, opponents say vouchers will cause public schools to lose money. According to a Center for Public Policy Priorities analysis, Texas public schools would lose an estimated $2 billion in the first year if the voucher bill passes.

Former Rep. Charles Gonzalez said this push to privatize public education is part of a larger trend across the country.

“Public now, I think, is viewed as maybe more representative of minorities," Gonzalez said. "Have we reached a place in the history of our country where what used to be the majority feels that their investment, their public dollar investment, is no longer serving their immediate needs or promoting their particular interest or an advantage that they presently enjoy. That’s where we are in America, and that’s what you’re seeing unfold in this particular piece of legislation.”

It’s unclear if the current voucher proposal will pass. House Public Education Chairman Dan Huberty said it will not leave his committee. He said he’s focused on fixing the current public school finance system with a bill that would inject $1.6 billion into the system. It’s unclear how far that bill might go in the Senate, where Lt. Gov. Dan Patrick has made vouchers a priority.

Correction: This story originally stated Henry Gonzalez died in 1999. He died in 2000.

UPDATE: In response to this story, the Texas Public Policy Foundation sent this statement:

“There are thirty states—plus Our Nation’s Capitol—where ‘so-called voucher programs’ are in place. By wide margins, children and parents who have school choice favor having education freedom. The results speak for themselves. This is not an Anglo, Hispanic, or Black issue—simply put, this is about access to a better life for kids of all colors and creeds. This is an opportunity issue."

Like schools in the state's large cities, many rural districts in Texas are worried the Legislature will embrace vouchers – which would allow families to get state money to move kids from public schools to private and religious alternatives.

They have pretty significant differences with their big-city brethren, though, when it comes to teacher retention and special services for students.

Kimball High School in Dallas has endured a demographic earthquake over the past 50 years. First came integration, then busing and white flight, followed by waves of immigration, economic troubles and competition from charter and private schools. Again and again, the educational landscape has been reshaped — and so has the Oak Cliff neighborhood of southern Dallas.

Poverty is surging at Kimball High School in Dallas. Fifteen years ago, 57 percent of the families were economically disadvantaged. Today, it’s 83 percent. The Oak Cliff school is battling those numbers and turning around a dismal academic record — in part with its hospitality and tourism program.