If you're flying through El Paso International Airport this holiday season, you may notice several protesters, holding signs that say things like “de-ICE the planes” and “this airport deports refugees.”

They’re calling for the city to stop allowing deportation flights from the municipally-owned airport.

On a recent morning at the airport, two protesters stood near a Christmas tree just before the security line. They handed out blue flyers explaining that Immigration and Customs Enforcement deports immigrants and asylum seekers through the airport, and encouraging concerned citizens to contact El Paso’s mayor to demand an end to the practice.

“We’re sending people to incredibly dangerous countries,” said Peggy Hinkle, a lactation consultant who decided to protest after recently learning about the flights. “Christmas season is a powerful time, I think, to look at how we are treating each other.”

The protests were partly prompted by a new Trump administration policy that sends migrants from Honduras and El Salvador directly to Guatemala to apply for asylum there instead of in the U.S. Some are being flown out of El Paso, including the first migrant sent to Guatemala under the policy.

Several travelers grabbed flyers on their way to the security line. A few stopped to talk with the protesters, including Joel Hernandez, a native El Pasoan who came back to town for a business trip.

“The painting they have there drew my attention,” he said, motioning to an image of a pregnant Virgin Mary being led to a plane, urged on by an ICE official. Hernandez said he would look over the information to “get clarity on it and move forward from there.” 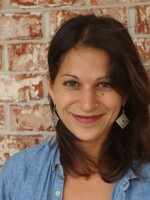 Mallory Falk
Mallory Falk covers El Paso and the border for KERA as part of The Texas Newsroom. That's a regional news hub linking stations across the state, the prototype for NPR's Collaborative Journalism Network. Previously she worked as a reporter at KRWG in Las Cruces, New Mexico, and WWNO, New Orleans Public Radio. Her reporting has aired nationally on programs including Morning Edition, All Things Considered and Here & Now. A winner of multiple regional Edward R. Murrow awards, Mallory is based in El Paso, and is part of the national Report for America project, which aims to support journalists in underserved areas of America.
See stories by Mallory Falk
Latest News
Related Content