What My Students Taught Me: Learning Ahead Of Rules | KERA News
Listen Live

What My Students Taught Me: Learning Ahead Of Rules

Everything in Rebekah Ozuna’s classroom is designed for the little bodies and fast-firing neurons of 3- and 4-year-olds.

Tiny chairs. A carpet for story time. Colorful bins full of blocks and toys. Even the windows are low to the ground so her students can see outside.

Ozuna teaches in an inclusive special education setting at Knox Early Childhood Education Center on San Antonio’s South Side. Half of her students have disabilities; half don’t.

Two years ago, one of her students, Naomi Campos, made the teacher take a closer look at her priorities. She realized that sometimes the way she taught didn’t fit her students, as well as her classroom, does.

RELATED | What My Students Taught Me: The Student Who Taught Me Not to Take It Personally

Ozuna had been teaching special education for six years when 3-year-old Naomi came zooming into her classroom at a Meet the Teacher event and started pulling books and toys off shelves.

“She just came right in full force,” said Ozuna with a laugh. “Mom was a bit emotional — crying, trying to fill out paperwork, and Dad’s patting her on the back going, ‘It’s okay. Everything’s fine.’ And Naomi’s like tearing up the room.”

RELATED | What My Students Taught Me: It's Never Too Late

“My husband and I were so worried that she was either going to stay where she was: Barely saying one, two, three; barely saying A, B, C … or continue to move back, or not even want to try, or just shut down,” Campos said.

Naomi was developmentally delayed by two years, and even further behind in speech. She was 3, but Campos said she spoke like an 8- or 9-month-old. 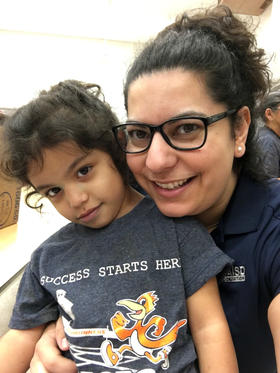 The first few weeks of school were a struggle for Naomi. She didn’t want to leave her mom’s side, and often threw herself on the floor when she arrived.

“The very beginning, it was a lot of yelling. A lot of, like, stomping the feet and maybe slamming the hands on the lap,” Ozuna said. “We’d walk over to her, and it would be like, ‘teacher, teacher, no.’ … Again, very bold to say, ‘No.’ ”

Ozuna said that happened pretty much every day for the first two months. Nothing the teacher said or did made a difference.

“I could easily write those things down and say, ‘She needs a more restrictive environment. She’s throwing blocks in class. She’s going to hurt somebody.’ And I didn’t want to do that,” Ozuna said.

Then, the time came for first quarter report cards. The results were discouraging.

“I looked at where she was, pacing wise, within her own goals and objectives, and she wasn’t there. Some of the items for doing shapes and letters and counting, they just — they weren’t there,” the teacher said.

Ozuna realized that if she didn’t find a way to reach Naomi, the 3-year-old would continue to speak and act like a 1-year-old.

Naomi wasn’t learning because she wouldn’t participate in class, but harping on her to change her behavior did nothing. So Ozuna went back to the drawing board.

“I started to change my (way of) thinking (from) making sure that she’s in compliance with everything that we do in the day to: ‘Am I meeting her needs with a child with a disability?’ ” Ozuna said. “‘Am I going off of her abilities in our classroom? Am I using her strengths in our classroom?’ ”

Naomi likes to take charge, so Ozuna started giving her opportunities to be a leader, like being at the front of the line to guide students to activities.

“It was an easy transition for (Naomi) in terms of: ‘Oh finally, now she’s going to listen to me. ... And: ‘I’ve been trying to show them the whole time that I could do this stuff,’ ” Ozuna said. “It kind of just threw her through a loop that we were a little more accepting of different things she was doing.” 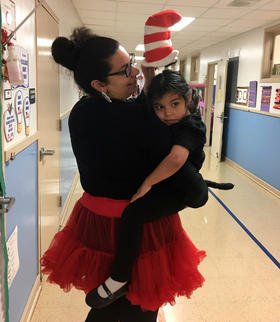 Naomi likes to be active, so during story time, Ozuna had the 3-year-old help tell the story by acting it out.

“I saw her go from like hiding in the classroom or saying she had to go to the bathroom just to escape it, to being included,” Ozuna said. “If you think about children who are like completely nonverbal and don’t have a lot of language, and they’ve never been able to make connections and share that kind of stuff, getting to share that kind of success with mom and dad was huge for us.”

By the end of her first year in pre-K, Naomi’s mom said her daughter was excited to go to school.

“She popped up like a rocket. They saw what things interested her, and they used that to get to her little brain,” Campos said.

By the end of her second year in pre-K, Naomi had almost caught up to where a 5-year-old is expected to be developmentally. She was speaking, singing, counting and speaking in full sentences.

Looking back on it now, Ozuna said sometimes she thinks about what would have happened if she hadn’t been able to reach Naomi. The preschooler would have ended up two, three, four years behind her peers. And that would have set the bar lower for the rest of her academic career.

“I feel like she came a long way,” Ozuna said.

Campos said Naomi sees a behavioral therapist and still has a slight speech delay, but the school decided she was ready for a general kindergarten classroom instead of a special education class.

Even though Naomi has a different teacher this year, she and her mom are still close with Ozuna. A picture of Naomi’s preschool class hangs on the wall by the kitchen table, and kindergartener likes to point out her former teacher.

Her mom says she had a bit of a rough start at school again this year, but whenever she starts to worry she texts Ozuna and she’s reminded how far Naomi has come.

This story is part of the "What My Students Taught Me" podcast, and was produced in partnership with the Teacher Project at Columbia Journalism School.

Camille Phillips can be reached at Camille@tpr.org or on Twitter @cmpcamille

Tags:
What My Students Taught Me project
education
ShareTweetEmail

What My Students Taught Me: It's Never Too Late

Perhaps the hardest part of being a high school teacher is seeing students drop out or fail to graduate. But sometimes, students and teachers get a second chance.

A New Center For Homeless Youth Opens In Dallas

An estimated 4,000 students in the Dallas Independent School District are considered homeless. On Tuesday, Dallas ISD and several non-profit groups marked the opening of the first phase of a homeless youth center.

The U.S. 5th Circuit Court of Appeals has ruled that the Texas Education Agency owes the federal government millions of dollars for failing to match a special education grant.

The Texas State Board of Education backed a motion Tuesday evening to reinsert Hillary Clinton into the state's 11th-grade U.S. History standards, two months after voting to remove the 2016 Democratic presidential nominee from the state's curriculum. In a separate action Tuesday, the board backed restoring disability rights advocate Helen Keller to the state's third-grade social studies curriculum standards.