Traveling at nearly three times the speed of sound, the flight lasted around 10 minutes and saw the rocket’s capsule reach a peak altitude of 346,406 feet. Blue Origin completed its first New Shepard test flight of the year in January. Thursday’s launch from Blue Origin’s Van Horn facility is the fifth flight for this particular vehicle, and 11th overall for the New Shepard booster.

The test launch comes as Blue Origin is set for an announcement next week, which some have speculated may be related to moon travel. The space company has previously said it plan to complete a lunar landing by 2024.

Watch a livestream of the launch below, courtesy of Blue Origin. 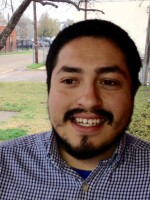 Carlos E. Morales
Carlos Morales is the full time KWBU News Reporter. Originally from El Paso, Texas. Carlos moved to Austin in 2007 where he studied English at UT. He received his Bachelor’s Degree in 2011. In 2013 he received his Master’s degree in journalism also from the University of Texas at Austin. Carlos had in internship at the NPR affiliate in Austin, KUT and freelanced for several groups including the Voces Oral History Project. Carlos enjoys running, reading, listening to music and – most importantly — playing uncle to his niece and 2 nephews.
See stories by Carlos E. Morales
The best stories from KERA sent to your inbox.
SUBSCRIBE
Related Content