More Than Just Angry Birds, Apps Can Have A Humanitarian Side Too

There's a trend in the startup world toward combining business and smartphone apps with altruistic goals.

At a recent hackathon, where tech developers get together to create new apps and programs in a short amount of time, about a dozen University of Washington computer science students work diligently on their projects.

Sophomore Laura McFarlane and her teammates are building a smartphone app that would offer a way for teenagers being trafficked to connect with resources, like a hotline number or a chat room where they can get help.

"One of the requirements of this project was to make it covert, so it's not easily detectable," McFarlane says, "and [that] it's for girls ages 11 to 21."

So the app, which they call Blossom, is disguised to look like it's just about fun for teens.

"We thought ... why not have it be like a fashion, lifestyle, celebrity gossip app, but with a real actual purpose underneath?" she says.

McFarlane had learned from research presented at the hackathon that the girls she's designing the app for do usually have smartphones.

Yaw Anokwa, who leads the Seattle startup Nafundi, is the poster child for a guy actually making money in a tech career with a humanitarian side.

"I think it's fantastic that people are doing hackathons and really getting folks engaged into the problem," he says. "But real solutions have to come from lots of years and lots of months in the field and really working with the community that you work in."

Nafundi develops software that, for example, farmers can use in the most remote parts of Uganda, where there's no Internet connection but there might be cell service. NGOs pay Anokwa to develop software that can be used by health care workers, police and firefighters.

For those willing to really invest the time, Anokwa says, there are more opportunities these days to make a living doing social good with technology.

"It's relatively straightforward for someone who has an idea to build a piece of software that does something," he says. "I think there's also a growing interest in groups in sub-Saharan Africa or NGOs or these kind of do-gooder organizations to look for ways to improve their processes with technology."

Mark Latonero, a researcher at the University of Southern California, believes human rights are the place to be in technology today, whether you're a startup or a tech giant.

"More tech businesses are getting involved in the human rights arena. And it's going beyond social corporate responsibility and beyond just PR," he says.

Latonero has done extensive research on the crossover between human trafficking and tech, and says that some trafficking is actually occurring on networks run by big technology companies.

"However, these tech companies are interested in user safety," he says. "They understand that if they have a safe environment for their properties and products online that it's really good business."

Latonero says Microsoft, Google and IBM are all doing this. Even Chase Bank's developers are using analytics to catch money laundering, but also to uncover evidence of sex trafficking.

As for University of Washington student Laura McFarlane, her app for girls may not ever get built. That, however, is not what the hackathon is really about.

"I definitely learned about a different side of human trafficking," she says. "This ... helped me see it from the perspective of the girls who are getting trafficked. It put a face to the numbers."

Perhaps someday she'll put that knowledge to use in her own tech startup, one that both does social good and pays the bills. 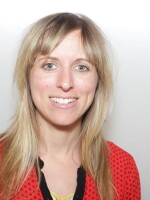 Sara Lerner
In her role as reporter and afternoon news anchor, Sara responds to events as they unfold: from an approaching tsunami to unbearable gridlock during the Alaskan Way viaduct closure. Sara's reporting has covered a range of subjects including the Dalai Lama's Seattle visit, local controversies about racy coffee shops, and the ups and downs of real estate in the Puget Sound region.
See stories by Sara Lerner
The best stories from KERA sent to your inbox.
SUBSCRIBE