Four years ago, Gates Elementary on San Antonio’s east side was on the state’s list of failing schools. Only 15 percent of its students were reading at grade level.

Now Gates is one of the fastest improving campuses in the San Antonio Independent School District. School officials credit its success in part to teachers like Kayla John.

Listen
Listening...
/
TPR's Camille Phillips takes a look at what the governor's call for merit-based teacher pay could mean for school districts like San Antonio.

During guided reading earlier this winter, the fifth grade teacher divided her class into groups to practice reading a poem aloud.

“Some people do read differently,” she said. “While this group was reading, towards the end they started to what?”

John is what the district calls a master teacher. SAISD pays her an extra $15,000 a year because she has a track record of success.

In exchange, she stays an hour late three days a week to tutor her students and plan with other teachers. She also participates in additional training.

“I don’t know how I’d be able to do it without all this extra time. At least do all the things I want to do with my class,” John said.

And, of course, the extra cash in her pocket pay doesn’t hurt either.

“It’s a challenge for us because so many of our teachers don’t live in our district, so it’s very easy for other districts to recruit them, especially when they’ve developed experience,” Martinez said.

San Antonio is one of five school districts praised by Governor Greg Abbott during his State of the State address for finding creative ways to help more students read on grade level and graduate ready for college or a career.

Abbott said Texas needs to reward successful teachers to help districts like them continue to improve.

“We must provide incentives to put effective teachers in the schools and classrooms where they are needed the most, and we must create a pathway for the best teachers to earn a six-figure salary,” Abbott said Tuesday to applause. 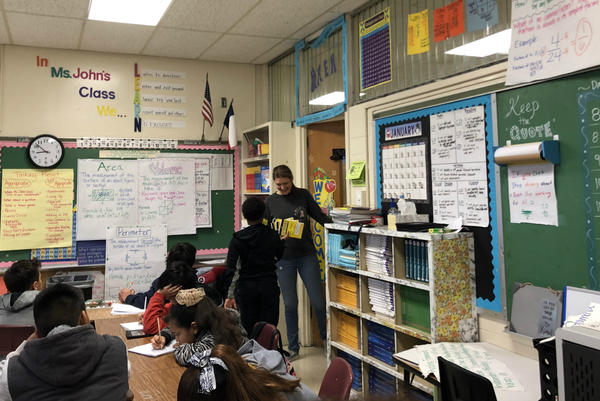 But not everyone is on board with the idea of merit-based pay. Louis Malfaro, the president of the Texas chapter of the American Federation of Teachers, said it’s offensive to teachers.

“It offends teachers to be told that we want good pay for teachers — but only the best teachers — and we define best as those teachers whose students get high scores on the state’s standardized test,” Malfaro said.

Malfaro said his members are okay with districts providing teachers incentives to work longer hours in high-need schools. But they’re not okay with the state test being the measure of success because they don’t think it’s an accurate reflection of a teacher’s quality.

“There are just a whole host of reasons why using that single metric is problematic,” Malfaro said.

Leaders in the state House and Senate are still working on their major school finance reform bills. But they are expected to file a bill that would give districts additional funding if they choose to use an evaluation system to increase the salary of high performing teachers.

That’s a big deal for school districts trying to pay teachers incentives on their own.

Half of San Antonio ISD’s funding for master teachers comes from a federal grant. Superintendent Martinez would like to grow the program from around 500 teachers to 2,000. But that grant expires in two years.

“The reason the state funding is so important is that if the state puts this in place, not only does it allow us to grow the program faster, but we can also grow it at scale, district-wide, with a sustainable funding source,” Martinez said.

However, before Martinez can ask the state for help, lawmakers have to decide they want to pay for it.

Lieutenant Governor Dan Patrick has prioritized an across the board $5,000 raise for teachers. In an op-ed for the Dallas Morning News, he said he also supports funding for merit pay. But as it stands now, the Senate version of the appropriations bill doesn’t include the money to pay for it.

Camille Phillips can be reached at Camille@tpr.org or on Twitter @cmpcamille

Gov. Greg Abbott, in his biennial State of the State address on Tuesday, stayed on message about education and taxes, continuing state leaders’ so-far unified focus on bread-and-butter policy reforms in a forum where he has in the past served up red meat.

Texas ranks 28th in teacher salaries, according to the most recent data. Teachers here make about $7,000 less than the national average. But that could change, with some legislators and state leaders talking about an across-the-board raise.

Sounds great, right? Well, maybe not for rural teachers, who can lag significantly behind their urban and suburban counterparts, compensation-wise.

The top judge on the Texas Supreme Court gave lawmakers a big wish list during his State of the Judiciary speech in Austin today. Chief Justice Nathan Hecht’s list includes some new spending, some savings and fundamentally rethinking business-as-usual in Texas courts.

Republicans Usually Tout 'School Choice' As A Priority For The Legislative Session. Not This Year.

Thousands of people will rally at the Capitol today to call for more K-12 options as part of National School Choice Week. But inside the Capitol, the once-prominent conversation isn't happening.

Stakes can be high for students and teachers in Texas when it comes to standardized testing – specifically, STAAR testing. Students usually need to pass to advance to the next grade, and eventually, to graduate. Families, teachers and teacher groups have been vocal in the past about how stressful the tests can be. They're concerned that spending the entire school year on preparing for the STAAR takes away from other learning opportunities.

Now, a Republican lawmaker has filed a bill in the House that would repeal STAAR testing.

The possibility of an emergency at a school isn’t an idea most of us like to dwell on. But as schools continue to be targets for those intent on causing widespread harm, training teachers and kids on what to do “just in case” has become common practice.

But though it’s common, that training is hardly standardized across Texas – or even at different schools within the same county. That’s why one Texas county decided to take the lead on designing a program to get everyone on the same page – that includes even the very youngest students.

In the tiny West Texas town of Valentine, population 130, there’s no gas station, and it’s a 30-mile drive to the nearest grocery store. But there is a school, and somehow, year after year, it outperforms the state average in academics.

What My Students Taught Me: Letting Them Know You Care Brings Big Dividends

"What My Students Taught Me" is produced in partnership with the Teacher Project at Columbia Journalism School.

For her first four years teaching history at Lakeview High School in the Dallas suburb of Garland, Karen Sowers didn’t have any big challenges. That changed the day she met Donald Pierson, 29 years ago.

The number of Texas school districts with policies allowing teachers and other staff to carry guns has increased almost 50 percent since the shooting at Santa Fe High School in May took 10 lives.