In an earlier draft of the deal, Bexar County was allotted $73.6 million as part of a settlement with Volkswagen for violating the Clean Air Act. The total was reduced to $61 million after pushback from other Texas communities. 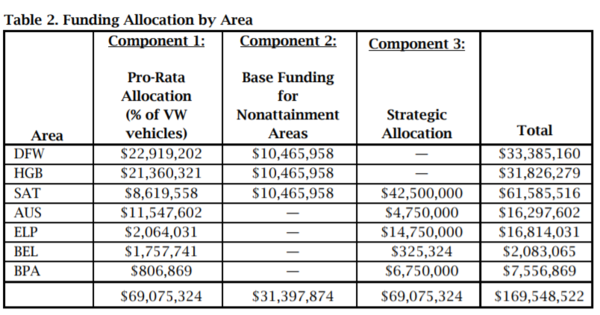 According to the Texas Commission on Environmental Quality, Bexar County was given priority — despite having less pollution than Dallas and Houston — because it fell into “non-attainment” of the National Ambient Air Quality Standards for Ozone pollution in September. The status means the area has unhealthy amounts of Ozone and could mean additional regulations like emissions testing of vehicles. Bexar County has two years to remedy it before additional regulations and costs are incurred. The state wanted to prevent that.

"It's a big help, and I was thrilled that they saw it that way — that the TCEQ saw as 'let's help out those areas that are closest that's where the low hanging fruit is,' " said Colleen Bridger. director of the Metropolitan Health District.

TCEQ released its plan Nov. 16 for doling out $209 million from the Volkswagen settlement. VW violated the Clean Air Act when it sold 590,000 diesel vehicles in the U.S. with technology masking their real pollution emissions. San Antonio brings in the largest share of the funds at 61 million dollars.

The Trust is intended to reduce nitrogen oxide pollution, reduce the public’s exposure to other air pollution, which comes primarily from cars, increase the use of zero-emission vehicles, and complement other incentive programs, like the Texas Emissions Reduction Plan.

Cities, businesses, school districts, and the county are eligible for funding from the settlement on a first-come-first-served basis. Bridger is tasked with working with stakeholders to facilitate a community-wide response to yet-released grant applications. TCEQ increased the amount it was willing to match from 60 percent, in an earlier draft, to 80 percent.

“It’s super important,” she said. “The fact that we don’t have to find 40 percent of that $61 million is a big deal for us because we knew this was coming, but we didn’t know in time to put any money in our budget specifically for this.”

Organizations looking to take advantage of the money will need to find an additional 20 percent. Bridger says the group is looking for ways of creating better infrastructure for electric cars in neighborhoods.

Environmental groups were happy to see TCEQ mandate that 15 percent be used for zero-emission vehicles but pushed for grants to be evaluated on the life of the deal rather than the upfront cost.

“Right now, ... the cost-effective calculator is putting a thumb on the scale for fracked-gas vehicles,” said Bay Scoggin, director of the Texas Public Interest Research Group.

The next step is for TCEQ to release its grant applications, which won’t happen until 2019.

The San Antonio City Council voted Thursday to approve a plan to redesign the Alamo.

The North American International Auto Show is a place where car industry gathers to celebrate — and in recent years to apologize. At this year's show in Detroit, it was Volkswagen CEO Matthias Mueller's turn to face the media.

The U.S. government, today, announced a broad-reaching $14.7 billion settlement in the Vokswagen emissions cheating scandal. EPA Administrator Gina McCarthy outlined the heart of the agreement during a news conference this morning.