Just up Interstate 10, about 50 miles northwest of San Antonio, stands a monument in a small town that's unlike any monument in Texas.

A bell tolls from the old limestone Immanuel Lutheran Church in Comfort. Across High Street, a four-sided white obelisk is shaded by massive live oaks. The text written in German, is etched in formal old English lettering. Historian, writer and Comfort citizen Anne Stewart said, to many, this is sacred ground. 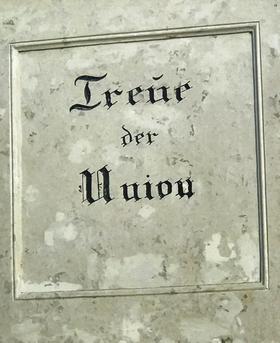 "We are sitting on this little rise above town, to the west,” she said. “You know these gentlemen are resting in peace.”

Those gentlemen were 34 German-speaking immigrants who, in the mid-1800s, settled in Hill Country towns like Fredericksburg, Boerne and Comfort.

“Just about every year since they came home in 1865, there has been some sort of a celebration,” Stewart said.

“Descendants can hardly speak more than about two words, because they start weeping."

Some of these immigrants established Comfort in 1854, a couple decades before Germany itself was born.

"There's no Germany until 1873. So we're talking about German speaking Texans, who came from the various tiny nationalities that in 1873 became larger Germany," UTSA Associate Professor Patrick Kelly said.

"Regarding what some of these immigrants endured," Kelly said, "it's just a very crazy Texas kind of story."

And its roots lie in western Europe in 1848.

"You had an influx of Germans coming into the Hill Country, especially after the failed revolutions of 1848," he said. 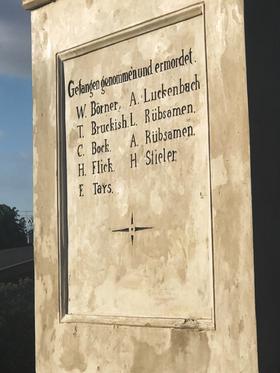 Those immigrants would take root here.

"You had revolutions against various monarchies and attempts to put in constitutional governments with constitutional freedoms, all over Europe," Kelly said.

These freedom fighters in turning their backs on the European monarchies also rejected organized religion when immigrating to Texas.

"There was not a church established in Comfort until 1892," he said.

Many American settlers in Texas were from places like Tennessee and Georgia, so the Germans really stuck out.

"These folks had not come from a slave holding region. So for a bunch of reasons, they're seen as very suspect," he said.

In 1861, Texas voted to secede from the Union and joined the Confederacy. As the civil war loomed, Texas saw every adult male as someone they could draft into the army. Many of the German-speaking immigrants didn’t like that.

"Suddenly now they are being called to join the Confederate Army, and they're not being asked,” Kelly said. “They're being told. And if you don't join the confederate Army, you're an outlaw." 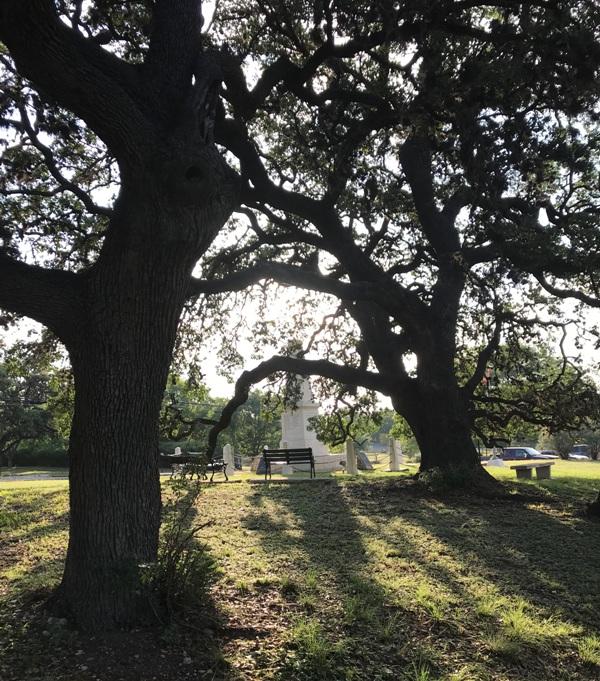 Kelly said these immigrants hadn't moved halfway around the world to end up fighting for a slave-holding system they didn't believe in. They were loyal to the Union, he said, and they weren't going to live in confederate Texas. So they decided to get out.

On Aug. 1, 1862, about 70 loyalists began a slow ride south to Mexico. Anne Steward said they took their time, not knowing their slow pace was a big mistake.

Kelly said they underestimated the Confederacy.

"I think they had no idea to what extent the Confederate government was willing to come down on them — that they're willing to kill them," he said. “Aug. 10, about 100 confederate soldiers ambushed the loyalists at their camp on the Nueces River. It was a massacre."

About 20 loyalists and two Confederates were killed. Two or three immigrant survivors made it to Mexico, she said. Nine were captured and were executed the next day. About 25 survivors scattered and tried to make it back home. But Stewart said their fates were sealed by something left behind by loyalist Fritz Tegner.

"They found Fritz Tegner's pocket notebook,” she said. “And in it was everybody's name." 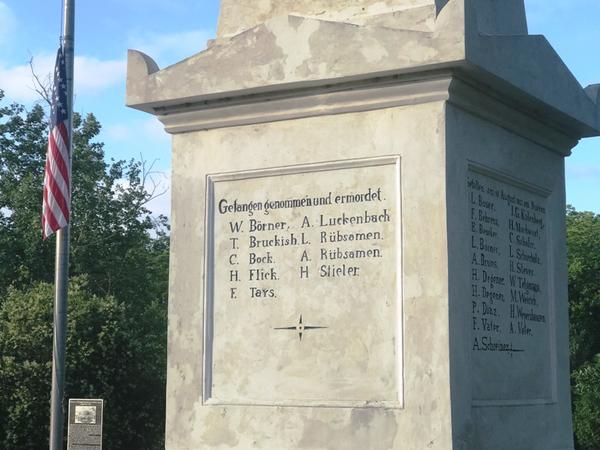 "Their remains were not buried. But I think there was more than that going on. They could have burned their bodies,” Kelly said.

They didn’t do so, and the Confederates’ cruelty frightened the remaining loyalists, who didn't dare retrieve the bodies of their loved ones.

But after the Civil War, the remains that could be found were recovered and buried in that half-acre plot on High Street. And when the white obelisk was erected in 1866 — four years to the day after the Nueces battle — hundreds of people attended the ceremony to dedicate the Treue Der Union monument.

"The people whose names are on the monument, they were folks that were fighting for constitutional government, freedom of the press of a civil rights, that kind of a thing," Kelly said.

Anne Stewart added that the battle still resonates more than a century later.

"You know their descendants, who have grieved over this since 1862, when they come here, they can sit underneath these oak trees. They can kneel by their grave. If you're going to die in dire circumstances, this is a good place to rest," she said.

The flag that flies over Treue Der Union is permanently at half staff.

Jack Morgan can be reached at jack@tpr.org

Dallas City Council remains undecided on what to do with a few existing Confederate landmarks.

In a meeting Wednesday, council members delayed a vote on whether to demolish the Confederate War Memorial at Pioneer Park Cemetery — and whether to remove the base where a statue of Confederate Gen. Robert E. Lee once stood from Oak Lawn Park.

Texas And The Confederacy: A Primer

The shooting at a historic black church in Charleston, South Carolina, last month spurred a nationwide debate over the Confederate flag. That state removed the flag that flew over its capitol, and retailers like Amazon and Walmart have stopped carrying the rebel flag.

The debate has extended to southern states, which are now grappling with what to do with Confederate memorials. And, in Texas, there are concerns about how new textbooks will teach the Civil War.