The effort is one of the many provisions contained within the U.S. Farm Bill, and Miller believes it could greatly benefit Texas farmers.

“It’s more of an alternative crop. It gives the farmers one more tool to make their financial decisions. It would be great for crop rotation,” Miller said. 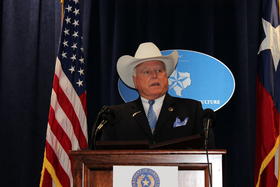 Miller said because of its low THC content, you can’t get high from hemp and the bill would not allow for commercial marijuana to be grown in Texas.

“The potheads don’t need to get too excited because the products from hemp aren’t what they are looking for,” Miller said.

He said hemp is an outdoor row crop, like corn, and has has practical applications. For example, it can be made into a paste and molded to replace plastics.

He said there are also medicinal elements to the hemp plant.

“The newest thing and what’s got everyone’s attention is CBD oil, which has been shown to be beneficial at treating PTSD, (Post-Traumatic Stress Disorder), and a lot of other ailments,” Miller said.

Congressional leaders are resolving any and all last minute differences with the farm bill in a conference committee and plan to it to the president in the coming weeks.

Ryan Poppe can be reached at rpoppe@tpr.org or on Twitter @RyanPoppe1

Sid Miller Has A Beef With Exempting Barbecue Scales From Regulation

By now, most Texans are familiar with Sid Miller. Famous for his ever-present cowboy hat, the state agriculture commissioner – who's also a rancher and a Republican – has generated his share of controversy in recent months. But this week he's making news on his own terms with a commentary written for TribTalk, the editorial wing of the Texas Tribune.

Texas Agriculture Commissioner Sid Miller announced a trade agreement Wednesday between the state and a group of settlers on the West Bank of Israel. Neither the U.S. government nor the United Nations recognizes the settlements.

Thousands of Texas Agriculture Commissioner Sid Miller's followers on social media might believe that terrorists are — in his words —preparing "for their jihad against the state and our nation” from a training compound outside of Houston.

The most recent farm bill is allowing a handful of farmers across the country to put hemp, the nonpsychoactive cousin of marijuana, in the ground.

Hemp Gets The Green Light In New Colorado Pot Measure

With recreational marijuana now legal in Colorado, small-scale pot shops will open up soon in places like Denver and Boulder. But that's not the only business that could get a boost: Large-scale commercial farmers may also be in line to benefit.