The Texas Legislature has gaveled in for a 30-day session focusing on 20 items, but the battle to pass as little of that legislation as possible has already begun.

Once lawmakers pass what's called a sunset bill, which allows a handful of state agencies to continue operating, Gov. Greg Abbott has promised a laundry list of topics that are popular among Republican primary voters. They include abortion restrictions and a bill blocking transgender bathroom access. Democrats are opposed to those additional items, so in the Senate, lawmakers began an effort to use Senate rules to slow deliberation on the sunset bill. Republicans pushed back, suspending the rule and speeding up the process.

“Everybody knows why we're here and the purpose that we're here,” said Republican Sen. Kelly Hancock of North Richland Hills. “Delaying that and not expeditiously moving forward in order to save these agencies and go ahead and pass the sunset bill makes little sense and is a waste of taxpayer dollars.”

By the afternoon the Senate had already passed two sunset bills out of committee; it plans to vote on the bills tomorrow. That’s also when a House committee is scheduled to take up its versions of the bills. Meanwhile, House and Senate Democrats called for a repeal of the so-called sanctuary cities law, known as SB 4, and warned against passing a “bathroom bill” during the special session.

Leaders with the Texas Association of Business and the Dallas Convention and Visitors Bureau, who say they’re already seeing negative economic effects from SB 4, joined House and Senate Democrats at an event after lawmakers adjourned for the day. TAB Treasurer Bob Cartwright said the situation could get much worse.

“If all unauthorized immigrants were removed from Texas, the state would lose $69.3 billion in economic activity,” Cartwright, flanked by Democratic lawmakers, told reporters at the event.

Phillip Jones, CEO of the Dallas Convention and Visitors Bureau, said he estimates a loss of $66 million in bookings off 38,000 cancellations in Dallas alone. He attributed that loss to SB 4. 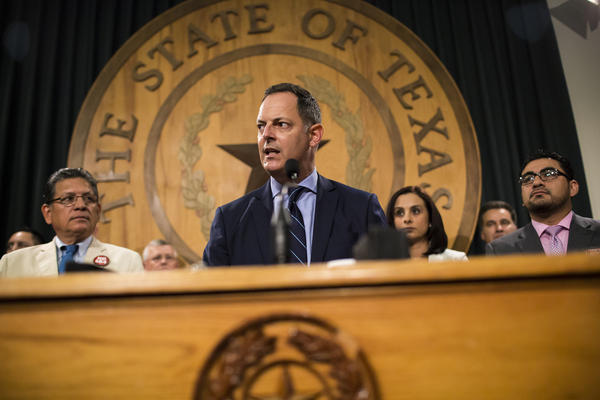 Dallas state Rep. Rafael Anchia said it’s important to remember the cumulative effect of that law and the possibility of the so-called “bathroom bill,” which would require people to use restrooms based on the sex on their birth certificates. That bill has the backing of both Lt. Gov. Dan Patrick and Gov. Abbott, but House Speaker Joe Straus was reportedly "disgusted" by the legislation during the regular session. If it passes, Anchia said, it will likely affect Texas’ ability to attract businesses.

Anchia is calling on Straus to allow SB 4 to the floor so it can be repealed. The bill passed the House on a vote of 94-53 in the regular session. The Senate approved it on a 20-10 vote along party lines. A repeal is unlikely, given that it passed by sizeable majorities in both chambers.

The Legislature’s special session begins this Tuesday. It’s 30 days long with 20 items on the agenda and Gov. Greg Abbott is calling the shots.

State lawmakers are back in Austin to kick off some legislative overtime.

What Is The Special Session And Who Pays For It?