"Texas came together behind a common-sense agenda of low taxes, low regulation and lots and lots of jobs," Cruz told supporters at an election night watch party in Houston. "[It was about] securing the border and keeping our communities safe, defending the Constitution and the Bill of Rights."

In El Paso, on the other side of the state, O'Rourke told supporters he had called Cruz to congratulate him and offered to work with him to move Texas forward.

LISTEN| An Analysis Of Cruz's Senate Win In Texas

"Tonight's loss does nothing to diminish the way I feel about Texas or this country," he said. 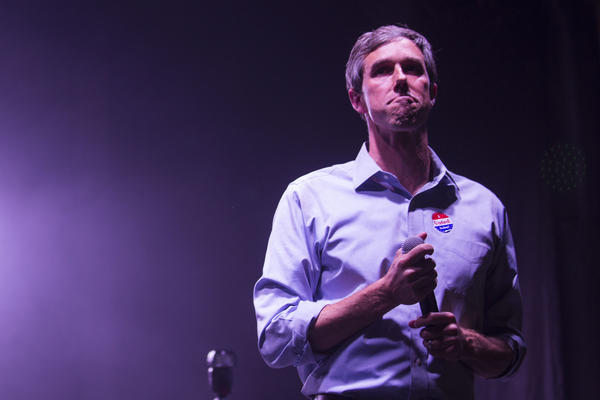 The U.S. Senate race in Texas was one of the most closely watched and expensive races in the country. In total, Cruz and O'Rourke raised more than $100 million. For the last few months of the campaign, O'Rourke routinely outraised Cruz as momentum for the El Paso congressman grew and the race tightened.

Cruz, who was first elected to the U.S. Senate in 2012, has been a prominent, if not contentious, figure in the Republican Party. Early on in his term, he led the Republican effort to shut down the government in 2013, in a move to defund the Affordable Care Act, also known as Obamacare.

RELATED | It's Election Day. Here's What You Need To Know To Vote Today.

In 2016, Cruz ran for president in a crowded GOP primary. He and President Trump routinely sparred, and Cruz famously did not endorse the president during his nominating convention.

Throughout the campaign, Cruz has assured voters that Texas is and will remain a conservative stronghold, frequently dismissing O'Rourke's media attention as hype.

However, O'Rourke ran his campaign with the assumption that pollsters and political operatives have been wrong about Texas. The state has historically had some of the lowest voter participation in the nation, and his campaign focused on getting a large swath of those non-voters – namely young people of color – to vote. O'Rourke argued that would help a Democrat win statewide.

The last time a Democrat won a statewide election in Texas was 1994. It's been one of the longest of stretches of Democrats being shut out of statewide office in any state in the country.

Know Your Rights On Election Day In Texas

It's Election Day — and before you head to the polls (if you haven't already during early voting), make sure you know your rights as a voter.

NPR And PBS Coverage Of The 2018 Midterm Elections

NPR reporters will be updating this live blog with results and analysis through Tuesday night.

For more analysis, stream PBS NewsHour coverage in the video embed below, starting at 5 p.m.

Get caught up on the latest news below. For coverage in Dallas-Fort Worth, bookmark this blog.