The San Antonio City Council voted to 8-2 to renew incentives for developers to help create thousands of housing units downtown.

“The time for action is today,” Mayor Ron Nirenberg said. “... As a community, we have to continue working to expand the supply of housing at every level and in every part of our city. This new and improved policy will help us accomplish that goal.”

The Center City Housing Incentive Policy spurred the development of more than 6,500 housing units downtown at a cost for the city of more than $100 million to developers.

“With the passage of this vote, I fear we might be getting closer to a vision of San Antonio that looks like Austin and less like San Antonio,” Saldaña said. “(San Antonio is) inclusive of those that work downtown, who work at a hotel, who work in the service industry. I want them to have a space to live in the downtown not just to work down here.”

Saldaña peppered Assistant City Manager Lori Houston with questions about how to require more affordable housing in the developments. The response was that the market wouldn't bear it. He asked for a 30-day postponement, but the measure failed to get enough votes from the council.

City staff has revisited the policy several times to add requirements for affordable housing. The original CCHIP had none.

The new policy expands CCHIP beyond downtown, and now includes 13 regional centers across the city. Each level has differing requirements for affordability and incentives for builders. 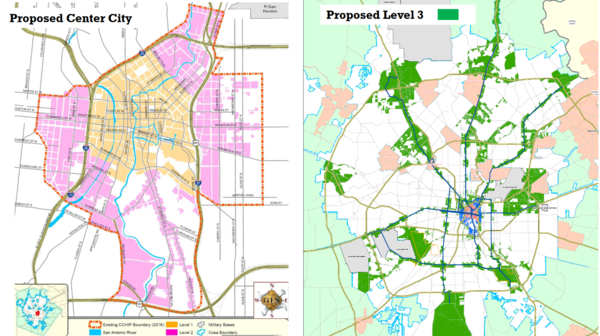 Community organizers failed to delay the vote. They had asked for impact studies on how it might displace low-income residents.

“This is about downtown and maintaining affordability downtown," she said, "and keeping downtown for everyone and not turning it into all these other cities.”

Under the new policy, a rental property project could be incentivized if the average rate was under $2.75 per square foot, which means a 500 square foot loft would go for $1,300.

“These programs are not perfect, but they are very very good," said Brad McMurray with Prospera Housing Community Services. "If you ask me, I would make it all about affordable housing. But I understand there is economic development that's necessary for a vital city.”

Opponents did praise changes including the exclusion of all properties zoned as single family or mixed residential from receiving CCHIP incentives — even if they are later rezoned — and projects that displace current residents. Also, any property constructed with CCHIP funding would be ineligible for some short-term rental permits, which are required for renting unoccupied properties on sites like Airbnb.

The city will have to reapprove the measure in two years. It also passed an expanded fee waiver program.

The program was placed on hold by Nirenberg in December of 2017 over concerns it was raising property values.

The program was created in 2012 as part of then-Mayor Julian Castro’s “Decade of Downtown” — an urban renewal project, encouraging housing in a center city that had been dominated by hotels.

According to a city-commissioned study, 64 projects were funded by the program, resulting in 6,543 housing units downtown. It also helped fund 164,099 sq. ft. of retail space and more than 46,000 sq. ft. of office space.

City staff call CCHIP a success. While praising its progress, many on City Council who supported the measure asked that it be closely monitored.

“This is going to be something we will continue to not take our eyes off,” said Rebecca Viagran, councilwoman for District 3.

Mayor Ron Nirenberg, who supports an impact study of CCHIP on current residents in the urban core, said he understands the community’s concern that the "Decade of Downtown" could become the "Decade of Displacement."

"(That’s) something no one on this council will allow to occur," he said.

In the city of Dallas, 23 percent of residents live under the poverty line — that's higher than the national average.

CitySquare is a nonprofit that's been fighting poverty in Dallas for 30 years. It offers job training, food, health care — and housing units.

Larry James, longtime CEO of CitySquare, recently talked with Krys Boyd on KERA’s Think about how they're trying to reduce homelessness with a "housing first" approach.

Texas is suing the city of San Antonio for an alleged violation of the state’s new anti-“sanctuary cities” law, in what appears to be the first legal challenge under the controversial statute.

The San Antonio City Council voted Thursday to approve a plan to redesign the Alamo.

Frank Vickers of Bastrop was on the couch watching “Jeopardy!” when there was a knock on the door. Before he could get up, a Bastrop County Sheriff's deputy was standing in his living room, ready to evict him.

Four Big Plans Aim To Make Austin More Affordable. Here's What They Would Do.

The bureaucratic stars over City Hall may just align in 2019.

Next year, the city will weigh four ambitious plans that aim to achieve the long-sought goal of making Austin more affordable.