Research Underway To Help Track Pollutants In The Edwards Aquifer

Jessica Quintanilla, a hydrologist for the Edwards Aquifer Authority, sloshes back onto shore in her black waterproof boots from the middle of this creek just off Scenic Loop Road, south of Grey Forest.

“Next, we have to set up the peristaltic pump,” she said, as she inserts the white, quarter-inch tube she dragged 15 feet back to shore from her water sensor, before flipping on a generator and starting the pump. 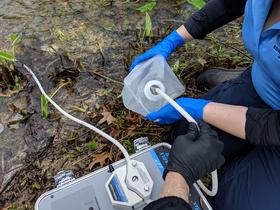 Quintanilla and a Southwest Research Institute scientist start pumping water into plastic containers of various shapes and sizes. They are looking for the last thing most of us want to think about in our drinking water: feces.

With her help, two projects from the University of Texas at San Antonio and SwRI are trying to find out where the pollutants are coming and how they're getting into the water.

For the first time, the Edwards Aquifer Protection Program is funding research to protect the aquifer. With $10 million, EAPP is currently funding seven projects. The EAPP is funded through a ⅛-cent sales tax voters first approved in 2000, and reauthorized in 2015, with money set aside for research.

“The way you look at fecal contamination is to look at the bacteria in the human gut,” said UTSA Professor Vikram Kapoor, looking on as two of his grad students help Quintanilla.

This is one of 20 sites his study has been monitoring for a year. Kapoor said, for the first time, they will be able to identify the different types of animal polluting the water through microbial tracking. With nearly $700,000 from the protection program, he can target genes in bacteria he finds and track them to their source. 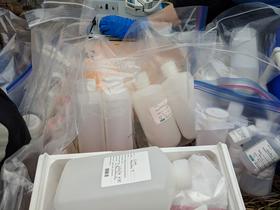 With these markers, they hope to figure out if most of the pollution is coming from animals, sewage spills, or the presence of other waste disposals.

Similarly, SwRI is collecting water for another study to determine levels of pollution from septic tanks and treated wastewater used for irrigation.

The creek sits on the Edwards Aquifer contributing zone, an eight county-wide piece of land the shape of a crescent moon just north of the narrow strip of porous rock known as the Edwards recharge zone, where water fills the aquifer.

When water falls across the Hill Country and collects into streams and creeks, it ends up over the recharge zone.

“It is at that point of time — over that narrow strip of land — it actually seeps back down underground and into the aquifer system,” said Grant Ellis, natural resources manager for San Antonio.

And scientists say that the Edwards is especially vulnerable to surface water because it is so porous.

“Oh my god, with the growth going on in the recharge and contributing zones of the Edwards, it’s really good to have money for these studies,” said Annalisa Peace with the Greater Edwards Aquifer Alliance.

GEAA received money for a separate study on retrofitting stormwater construction. But she said GEAA has wanted to know the answers to these questions for years.

In 1984, San Antonio was the site of one of the first aquifer contaminations of feces-based cryptosporidium, an outbreak that sickened 80 people.

“I think it’s absolutely needed because, I think, we’ve been kind of trusting our luck frankly that that won’t happen again,” Peace said, “and I have had public health officials tell me that they are really worried about this.” 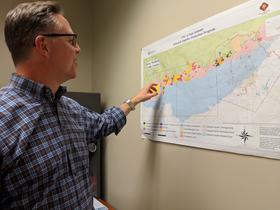 The two studies will provide data on where pollution is coming from, how it can be controlled through regulatory changes on septic tanks and whether or not these contributing zones areas should be considered for a conservation easement, which is where they pay owners not to develop the land. It’s where the vast majority of voter-approved protection program’s money has gone the past 18 years.

Many in San Antonio know about the aquifer when and they can water their lawns, Ellis said, but “The quality of the water is just as important as the quantity.”

“Being able to assess the quality of the water recharging into the aquifer is going to be able to tell us how we can protect it in the future,” he said.

Just this week, C40 renewed the City of Austin's membership for three more years. C40 describes itself as "a network of the world’s megacities committed to addressing climate change."  So, how is Austin doing in reaching its goals to address climate change and manage the impacts that are already here?

As Cities Sprawl, More Texans Are Exposed To Tornadoes

On the High Plains in West Texas, hot winds blast through cotton fields as far as the eye can see.

In the middle of it all is a tiny vineyard.

Andis Applewhite is the owner. She's an artist whose family has worked this land for a century. They once planted crops more typical of the neighborhood, like cotton and wheat. Applewhite decided to try something different: She put in a couple of acres of cabernet franc grapes.

Out in the sand dunes of west Texas, a tiny lizard has been wrapped up in a big controversy for years. The four-inch long dunes sagebrush lizard calls the middle of the Permian Basin home, but conservationists have long feared the oil boom there would be detrimental to the lizard’s rare habitat. But in the past year, a new threat has emerged.

Does the Wink Sink ring any bells for you? It is, as the name implies, a pair of giant sinkholes near the town of Wink, located about 60 miles west of Odessa. One of the reasons why they’re remarkable is that they’re unique, though that may not always be the case.

Nearly two years after a pair of giant West Texas sinkholes gained national attention, new research in the area shows they likely won't be the last in the region.