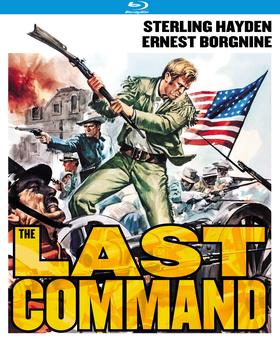 Depending on your source, there are somewhere between a dozen and 20 or so movies that have been made over the past century about the Texas Revolution.

The 1950s were an especially prolific time for the Alamo on film, as Hollywood produced “The Man from the Alamo” (1953), Disney’s “Davy Crockett” (1955), with native Texan Fess Parker in the title role, and the television series “The Adventures of Jim Bowie.”

John Wayne first become interested in the Alamo in the late 1940s. He began pre-production at Republic Pictures on the film that would eventually be his feature directing debut at another studio, “The Alamo,” released in 1960.

But some years before John Wayne set up shop at Happy Shahan’s (not yet named as such) Alamo Village near Brackettville, the dusty, arid climes of West Texas were already luring Hollywood. Paramount Pictures made a film called “Arrowhead” in Brackettville in 1951. In the early 1950s, Duke left Republic Pictures, so the studio took some of his ideas and made “The Last Command.”

Some folks say it’s the best of the extant Alamo films.

“The Last Command” features Jim Bowie as its hero-protagonist, and it cast the 6’5” Sterling Hayden to play Bowie, who was described in real life to be six feet tall and “stout.”

The movie posits that before the Alamo, Bowie and Antonio Lopez de Santa Anna were practically best buds. It uses that plot device as a way to do something few other Alamo movies do: (try) to explain some of the political tension before the revolution broke out in 1835. It concludes with Santa Anna’s defeat at San Jacinto in April, 1836.

Noted film historian Frank Thompson says few Alamo movies get much of anything right, but there’s always a nugget of the truth in each, usually in surprising places. Of all the Texans, Jim Bowie probably did have the closest ties to Mexico. He did become a Mexican citizen in 1830. He did marry Ursula Veramendi. His wife died of cholera in 1833, along with at least one child.

Their sad fate is the last straw that sends Bowie back to San Antonio, where Stephen F. Austin and William B. Travis welcome him into their struggle for independence from Mexico. It’s explained in “The Last Command” that the Texan colonists are fed up with Santa Anna’s indiscriminant jailing of citizens such as Austin, and they want a return to the Mexican constitution of 1824.

Absent of course is one of the primary reasons behind that desire—white Americans immigrating to Texas wanted to hold onto their slaves, and Mexico had abolished the practice.

But I digress. How’s the action in this movie? Hayden doesn’t feel like any Jim Bowie I’ve ever seen—he looks and acts so hard-boiled I kept expecting him to pull out a machine gun at any moment—but I enjoyed the dialogue that screenwriter Warren Duff wrote for him. Bowie seems genuinely interested in finding compromise before finally joining the Texas revolutionaries. Davy Crockett is played by the bearded Arthur Hunnnicutt, which takes some getting used to, but he gets off some good lines. There’s a romantic subplot with fictional characters Jeb Lacey (Ben Cooper) and Consuelo de Quesada (Anna Maria Alberghetti), and several other imagined characters turn up, played by such character actors as Ernest Borgnine and Slim Pickens. (Which reminds me, there’s a curious melody in the film’s score that sounds a lot like the music from “Blazing Saddles.”)

The actual battle itself is exciting, if staged a little strangely, with Mexican cavalry charging the outside walls of the mission. I guess they just want to get there in time to die faster than the foot soldiers?

And inside the Alamo, who goes down swinging? Well, our hero Jim Bowie manages to stand up from his sick bed and fight through being stabbed with a bayonet before finally succumbing. After the battle, the movie features a short denouement with Sam Houston welcoming the women and children survivors of the Alamo.

“The Last Command” is rarely seen today. Until this month, it was unavailable on home video.

Kino Lorber scanned the original negative in 4K, and while there are scratches evident throughout the print, one’s eye adjusts, and tends to ignore the blemishes in favor of the Trucolor process image, which is rendered nicely. My favorite Alamo movie is still John Lee Hancock’s 2004 film, but dare I say it? “The Last Command” is worth remembering.

“THE LAST COMMAND” ON BLU-RAY/DVD

Kino Lorber has released “The Last Command” on Blu-ray. Its only special feature is an excellent audio commentary by Frank Thompson, film historian and author of “Texas Hollywood” and “Alamo Movies.” He details where history and Hollywood diverge, and gets into detail on the production of the film, including John Wayne’s early involvement with its development, before he left Republic Pictures. There’s also a nifty bit of trivia for San Antonians: the sky blue uniforms the Mexican soldiers wear in the film were not manufactured in Hollywood, but in San Antonio, at a facility that specialized in high school marching band outfits.

The master plan calls for closing streets around the Alamo, creating a museum, and relocating the Cenotaph monument that honors defenders to another spot in the plaza – a proposal that generated some public opposition.

So many of my favorite films this year seemed to be in close conversation with each other that it didn't make sense, in the end, for me to separate them. So I didn't. Here are my 12 favorite movies of 2018, listed as a series of themed pairings. You can read my full write-ups of these pairings here, or find a simple list below:

The city of Dallas hasn’t been distributing arts funding equally across races and neighborhoods, according to a new blueprint for the city’s cultural future — and the city wants to do better.

While researching the farm worker movement, filmmaker Laurie Coyle came across several black and white photos. One woman, who appeared frequently in the photos, was later discovered to be Maria Moreno (00:17). And a new book of original song collaborations tell the stories of San Antonio West Side’s oldest residents (15:50).

An advisory committee is expected to recommend today that the Texas State Board of Education remove the word "heroic" from social studies curriculum when referring to defenders of the Alamo.