The future of monuments to Civil War figures on the University of Texas at Austin campus was discussed at a public forum today. The University held the first of two forums to collect community feedback about the placement of a statue of Jefferson Davis on the main mall of campus.

In June, South Carolina Governor Nikki Haley declared that the state would remove the Confederate flag from its Capitol building, in the wake of a racially motivated shooting spree in a Charleston church that killed nine. South Carolina's state senators voted officially today to remove the flag, but elsewhere in the U.S., the debate about Confederate symbols, hate and history continues.

Students, staff, professors, alumni and Austinites stood on the auditorium stage of the Student Activity Center this afternoon and voiced their thoughts on the Davis statue — its history, and what it represents and symbolizes to students.

“I’m tired of validating my existence, my right to be in this space and feel comfortable on this campus," Sky says. 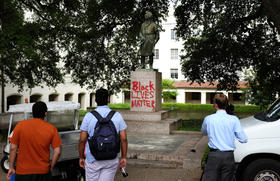 Most of those who signed up to speak at the forum did so in favor of removing the Davis statue, along with other statues on campus that feature Confederate figures. But Shelby Little, a member of the Descendants of Confederate Veterans, defended their placement.

“What UT is attempting to do regarding the removal of these statues of President Davis and the other Confederates on this campus, is wrongheaded, short-sighted and contrary to your own liberal principles of tolerance, unity, inclusiveness and respect for differing points of view,” Little says.

Little says the Confederate leaders were “extraordinary men of their age.”

"The vitriolic slandering of these great men is disgraceful,” he says.

Nearly all the professors who spoke say the university should remove the statue. English Professor Snehal Shingavi says this ongoing dialogue is important — but embarrassing.

“There’s something humiliating about having to come up here and convince you about ethics and morals you should already have in you about racism...This should be a non-issue,” Shingavi says.

Edwin Dorn, a Professor at UT's LBJ School of Public Affairs, says his Texas roots extend back to the 1820s.

“When we erect a statue, we’re making a calculation,” Dorn says. “We’re saying that the good things that this person has done far outweigh any wrongs he or she may have committed. It is impossible to make such a calculation about Jefferson Davis.”

The 12-person committee that hosted today's forum will hear more public comments before making recommendations to UT President Greg Fenves about the placement of the Davis statue. The next forum is scheduled for July 15, and the committee will make its recommendations to Fenves by August 1. Fenves will make the final decision whether to remove the statue.

Listen
Listening...
/
An mp3 version of this story.