The Majority Of U.S. Gun Deaths Are Suicides, But A New Poll Suggests Few Americans Know It

Mass shootings may grab the headlines, but suicides are by far the leading category of gun death in America. However, most Americans don’t know this, according to a new national poll from APM Research Lab, Call To Mind and Guns & America.

The poll asked more than 1,000 Americans what they think the leading cause of gun deaths is.

Jennifer Stuber, a professor of social work at University of Washington and founder of Forefront Suicide Prevention, said the findings are unsurprising given the intense media coverage of events like mass shootings.

“What I think drives it is the way in which we cover the issues of firearms fatalities in the news and popular culture, whether that’s TV, movies, etc.,” she said.

In reality, fully 60% of gun deaths in the U.S. every year are suicides.

Horrific as they are, mass shootings represent a tiny fraction of gun deaths in America. They account for a few hundred deaths every year, as compared to an average of roughly 19,000 gun suicide deaths. There were 23,854 suicides by firearm in 2017, according to the U.S. Centers for Disease Control and Prevention.

And even with a murder rate well above other developed nations, gun homicides, which account for roughly 12,000 deaths per year in the U.S, are a distant second compared to suicides.

Suicide prevention experts say a lack of understanding about the crisis leaves efforts to lower the suicide rate chronically underfunded, leaving those trying to stem the tide of rising suicide numbers trying to change those misperceptions. 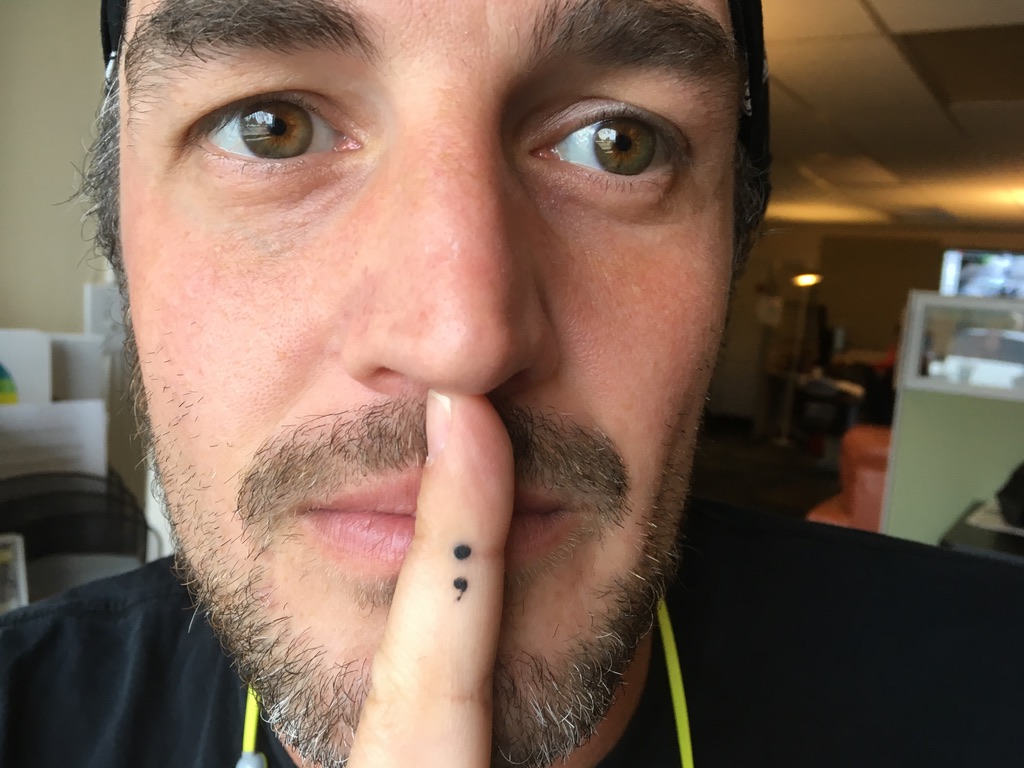 Wade Beus, outreach coordinator for the Idaho Suicide Prevention Hotline, shows his tattoo of a semi-colon, which is a symbol of suicide prevention. Suicide is responsible for the vast majority of gun deaths in America but a recent poll from APM Research Lab, Call To Mind and Guns & America found that most Americans don’t know this.

“If the public had a better understanding of that, we might be putting more resources toward the issue of suicide prevention, which is very much under-funded,” Stuber said, “but also we would be thinking about policy solutions perhaps a little differently.”

It was a personal tragedy that led Stuber to become involved in suicide prevention. She started Forefront after her husband used a gun to take his life. She says like many Americans, she didn’t understand the scope of the suicide crisis until being touched by it.

“Until it becomes a part of everyday conversation, we’re not going to see the statistics that you’re reporting in this study turn around,” she said.

And that misinformation can trickle down to local prevention efforts. 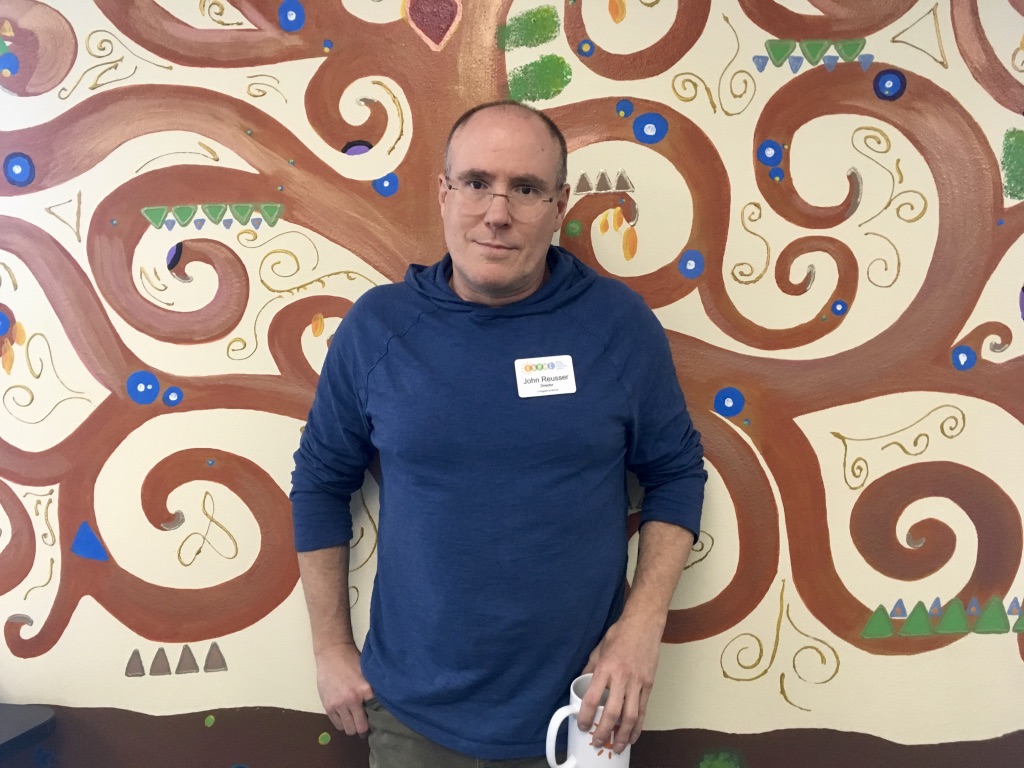 Idaho Suicide Prevention Hotline Director John Reusser stands in front of a Tree Of Life mural at the hotline offices in Boise, Idaho. Reusser and other experts say misperceptions about suicide can lead to lack of support for prevention efforts.

For many Americans the instinct is to look away from suicide rather than confronting an uncomfortable issue, said John Reusser, director of The Idaho Suicide Prevention Hotline.

Already this year, another Idaho suicide prevention organization shuttered due to lack of donations — this in a state with the sixth highest rate of suicide in the country.

“If there is a mass shooting or a firearm death that’s not suicide, a lot of those will hit the media,” Reusser said. “But unless it’s a celebrity completion of suicide by firearm it’s probably not going to be in the media.”

Reusser said we need to do better at having a public, frank conversation about suicide. 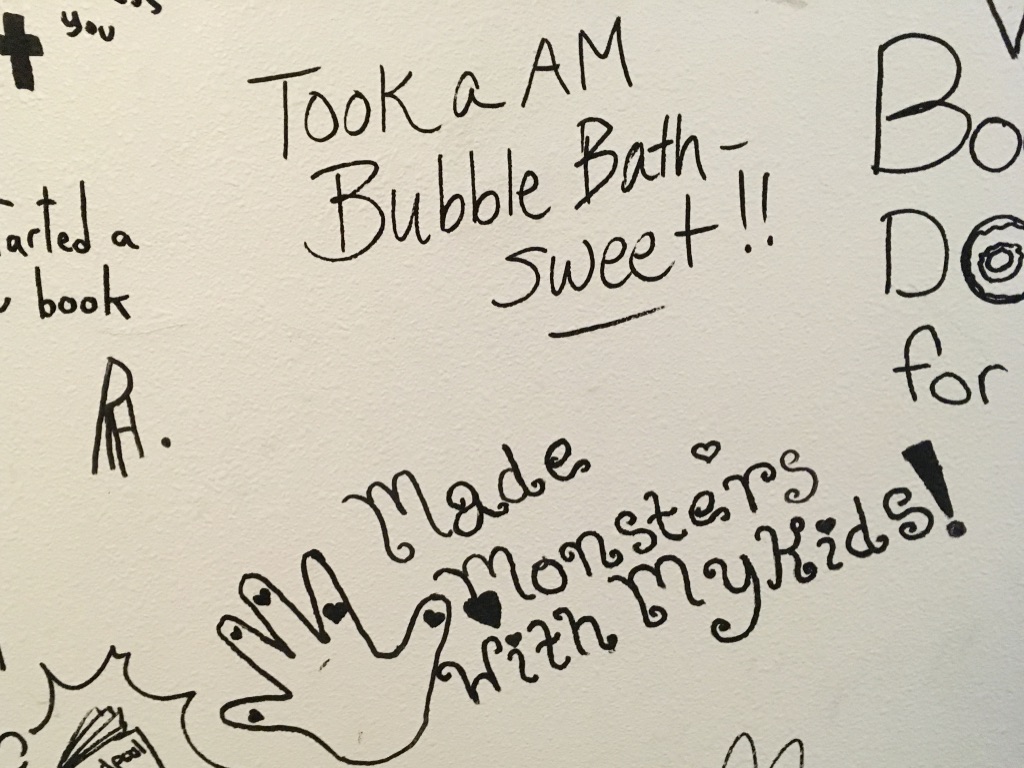 The self care wall at The Idaho Suicide Prevention Hotline offices in Boise, Idaho.Suicide is responsible for the vast majority of gun deaths in America but a recent poll from APM Research Lab, Call To Mind and Guns & America found that most Americans don’t know this.

Another problem is a severe lack of research on the topic, driven in part by legislation in the 1990s that all but ended federal funding for gun studies.

Dr. Mark Rosenberg worked in injury prevention at the U.S. Centers For Disease Control and Prevention for two decades and saw research into gun suicides and just about every other aspect of gun violence grind to a halt.

Rosenberg, who is now at the philanthropy group The Conrad N. Hilton Foundation, says it’s frustrating that we are failing to tackle what he and most experts see as a largely preventable problem. To stop suicide, though, researchers need the resources to study the root causes of suicide and prevention strategies, a goal Rosenberg says is made more difficult by a bitterly divisive gun rights debate.

The survey of 1,009 Americans was conducted from July 16 to 21, 2019, by SSRS with live caller interviewers for APM Research Lab, a division of American Public Media that conducts research projects.

The poll was conducted just weeks before mass shootings in El Paso, Texas, and Dayton, Ohio, and was done in partnership with Guns & America and Call To Mind, an initiative by American Public Media on mental health.

Resources if you or someone you know is considering suicide:

How A Proposed 3-Digit Suicide Hotline Could Help Prevention Efforts

The Federal Communications Commission is proposing to launch a new three-digit hotline for people who are feeling suicidal or are going through any other mental health crisis. It recommends making 988 the new national number to call for help, replacing the current 10-digit number.

The agency presented the idea to Congress in a report earlier this month and is expected to release more information and seek public comment about the proposal in the coming months.

No One Knows Why Rural East Texas Faces High Suicide Rates. And Resources To Help Are Scarce.

The mind of Keilan Banks is perpetually caught between two worlds. In one of them — what many of us would call the "real world" — he attends art school at a community college in Kilgore, a small town just southwest of Longview in East Texas. He works at a local Walmart four days a week wrangling shopping carts. The other world is one that Keilan alone can see: a frightening, shadowy place where faceless figures manifest and winged devils circle overhead. Disembodied voices sound from all directions, Keilan says, urging him to hurt himself.

Suicide Rate For Girls Has Been Rising Faster Than For Boys, Study Finds

The number of people dying by suicide in the U.S. has been rising, and a new study shows that the suicide rate among girls ages 10 to 14 has been increasing faster than it has for boys of the same age.

Boys are still more likely to take their own lives. But the study published Friday in JAMA Network Open finds that girls are steadily narrowing that gap.

A recent survey from APM Research Lab, Call To Mind and Guns & America found that most Americans — including those who own guns and those who don’t — support laws requiring gun owners to store their firearms with a lock in place.

But not everyone sees storage the same way.

After a mass shooting, people and resources pour into the community to help victims and survivors cope. As these incidents continue to unfold, the grim infrastructure that springs up around them is growing larger and more sophisticated.