Gov. Greg Abbott has called for a special session of the Texas Legislature to begin July 18. 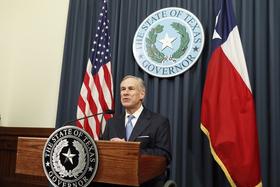 "Considering all the successes of the 85th legislative session, we should not be where we are today," he said. "A special session was entirely avoidable, and there was plenty of time for the Legislature to forge compromises to avoid the time and taxpayer expense of a special session."

Therefore, he said, he was going to make the session count.

Abbott said the priority was to pass a sunset scheduling bill to keep key agencies, including the state medical board, from shutting down. But then he tacked on more than a dozen other items, including the so-called bathroom bill, property tax reform and extending the maternal mortality task force.

After 140 days in Austin, the regular legislative session ended last week without passing legislation on property taxes or a so-called bathroom bill. Lt. Gov. Dan Patrick has been calling on the governor to bring lawmakers back for 30 days to specifically work on these issues.

In case you missed all that. #txlege pic.twitter.com/qvsoEEsqUc— Matt Largey (@mattlargey) June 6, 2017

Below is a breakdown of some of the key items.

The real reason for Abbott's announcement Tuesday isn't bathrooms or property taxes; it's about keeping a handful of state agencies open.

While battling over bathrooms and taxes, the House and Senate were unable to agree on passage of a sunset scheduling bill. Texas reviews all of its state agencies periodically to see if each is functioning efficiently – or if the agency is even needed anymore.

To make sure that review is conducted, each agency is put on a schedule, and if it isn't reviewed by the deadline, the agency automatically shuts down. If lawmakers are running out of time, they simply reschedule the review.

But the bill to reauthorize several agencies, including the state medical board, failed to pass this session. That means some action must be taken before the next legislative session in 2019 or those agencies will close.

The Senate and House passed versions of a property tax bill that would give voters a bigger say on how much cities and counties can increase property taxes. Lawmakers say the law is needed to slow local tax increases. City officials say the law would hamstring a municipality's ability to pay for vital services like fire and police.

During the regular legislative session, the Senate and House failed to reach an agreement over how large a percentage tax increase a city should be able to impose without triggering a public vote. Currently an 8 percent increase triggers a vote. Abbott is asking to lower that cap. Austin Mayor Steve Adler said lowering the cap would make it difficult for the city to fund essential operations.

The bathroom bill, as proposed by the Senate, would block transgender people from using the bathroom that corresponds to their gender identity when in a public school or state-run facility. It would also prevent municipalities from passing local nondiscrimination ordinances for any class of person not already covered by state nondiscrimination laws.

Both of those bills passed in some form during the regular legislative session, which ended last week, with Senate leaders accusing the House of passing weaker versions of the bills. Abbott specifically called for lawmakers to pass the House version of that bill, though, his official call for the special session doesn’t explicitly note that.

Abbott also asked state lawmakers to take up a handful of anti-abortion bills that didn’t pass during the regular session.

Lawmakers passed a sweeping omnibus abortion known as Senate Bill 8, which Abbott signed into law today. The law creates a state-level ban on a type of abortion that’s already banned by federal law and bans fetal tissue donations for medical research. It also bans a common type of abortion, mostly used after 14 weeks of pregnancy.

Thanks to some late additions, SB 8 was amended to include a provision requiring health care providers to cremate or bury fetal remains. The law won’t go into effect until September, but the state’s last attempt to require this was blocked in federal court.

Abbott also said he wants the Legislature to pick up a bill that would prohibit state and local governments from spending public money on abortions, prohibit private insurance companies from covering legal abortion procedures and add more reporting requirements for abortion providers.

One of the few bipartisan issues Abbott asked the Legislature to revisit was the state’s maternal mortality crisis.

Texas has experienced a sharp increase in the rate of women who have died while pregnant or shortly after giving birth. There were a couple of bills dealing with the issue that passed – including measures improving access to care for low-income women with post-partum depression and another that improves maternal death investigations and reporting practices.

However, one important bill, Senate Bill 1929, was killed by a group of conservative lawmakers known as the Texas Freedom Caucus during a bout of political infighting.

SB 1929, which was introduced by Republican state Sen. Lois Kolkhorst, would have extended the work of the state’s existing maternal mortality task force, which is set to end in 2019.

The bill also included an amendment from Democratic state Rep. Shawn Thierry asking the state to look specifically at why black women were three times more likely to die.

“To protect women in Texas I am calling on the Legislature to complete their work and to pass legislation to address the maternal mortality rate in Texas,” Abbott said.

The governor's call included one items that's historically been a tall order for the last few legislative sessions: a reform of the state's school finance system. Texas Supreme Court called that system "Draconian" last year in a ruling that found inconsistencies in how money is distributed among Texas public schools – namely, its "recapture" system, which requires wealthier school districts to disperse revenue to needier districts.

That issue was sidelined this session after a House and Senate fight over school vouchers. While lawmakers didn't ultimately pass legislation expanding voucher programs, Abbott did list a voucher program for parents of special needs students on his call for the special session. A $1,000 raise for teachers was also listed on the call, which Abbott said would help "retain quality teachers" in Texas public schools.

Abbott specifically mentioned the City of Austin in laying out proposed legislation that aims to cut back on local regulation. The governor said the city’s overregulation was “stifling our economy, interfering with job creation and undermining private property rights.”

One item would prevent local governments from changing regulations midway through a construction project. Another aims to speed up the permitting process at the local government level. That system has been notoriously slow and convoluted in Austin. Abbott said city bureaucrats shouldn't be able to "drag out project and drive up the cost of doing business."

“Government’s role is to empower and to create greater opportunity for both businesses and citizens to be able to prosper,” Abbott said.

The City of Austin recently introduced an optional expedited permitting process. It will allow developers to pay a premium in exchange for a speedier review.

In Austin, property owners must show that heritage trees are sick or pose a safety risk if they want them cut down. Around 50 Texas cities have rules that protect certain trees, but Abbott, who views the rules as an infringement on property rights, seemed to single out Austin’s law.

“Some local governments, like the City of Austin, are doing everything they can to over-regulate,” he said.

The governor also asked legislators to pass a law that would cap how much money a city or county could spend.

“Limiting the growth of both state and local spending to population and inflation will contain government spending while also retaining flexibility for our faster growing communities,” Abbott said.

Abbott also revived a bill from Sen. Donna Campbell that regulated municipal annexation, which failed to pass during the regular session. The bill would’ve required cities to hold an election for homeowners living in an area poised for annexation into a city. Currently, a city can annex land without input from residents – and it’s rare that an annexation does not go ahead as planned.

Today, Abbott signed a bill outlawing texting while driving statewide. Abbott asked that during a special session lawmakers ensure this law overrides any local regulations, including Austin’s hand-free driving ordinance, which prohibits any use of an electronic device while driving a car.

Gov. Greg Abbott's announcement on whether he will call a special session is not expected to happen before next week.