Attorneys arguing the case of Senate Bill 4 – Texas’ so-called sanctuary cities law –head back to federal court today. Judges of the U.S. Fifth Circuit Court of Appeals in New Orleans will consider a temporary block placed on most of the law in August, which was partially lifted in September.

Thomas Saenz, president and general counsel for the Mexican-American Legal Defense and Educational Fund, which is representing the plaintiffs in the case, said the three-judge panel will consider “the entirety of the preliminary injunction – whether it was appropriate, should have gone further or should not have gone so far.”

Among reams of filings in the case sits this one: a statement from three former federal immigration officials against SB 4. In their argument, the men say SB 4 hinders the federal government’s ability to do its job as the enforcement arm of immigration law.

Two of the three men, Paul Virtue and Bo Cooper, served as general counsel for the Immigration and Naturalization Service under Presidents Ronald Reagan, George H.W. Bush, Bill Clinton and George W. Bush. The third man, Stephen Legomsky, served as the senior counsel to the Secretary of Homeland Security under President Barack Obama.

Their argument centers on Section 287(g), a portion of the Immigration and Nationality Act, which describes how local law enforcement, such as police officers, can act as federal immigration agents. 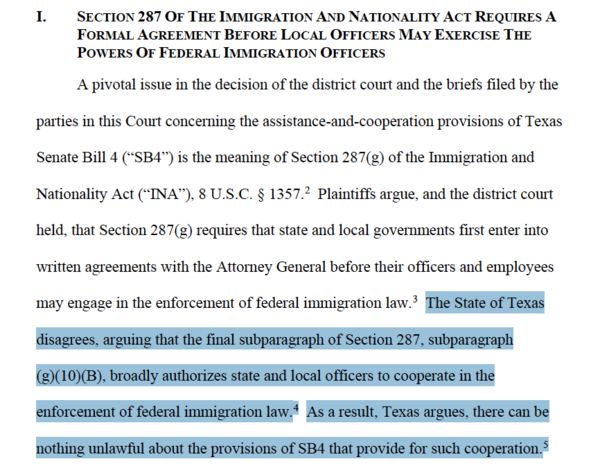 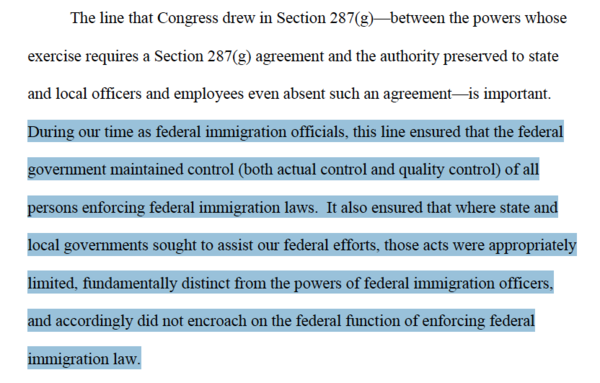 SB 4 penalizes sheriffs who do not honor all requests from the federal government to detain suspected undocumented immigrants booked into local jails. Sheriffs face civil and criminal penalties. The law also punishes local law enforcement, such as police departments, that have policies prohibiting officers from asking about immigration status.

Because of this, Virtue, Cooper and Legomsky argue that SB 4 “is designed to encourage and facilitate local enforcement of federal immigration law.” 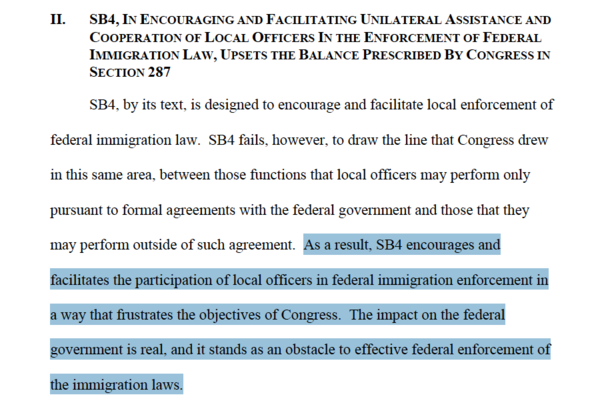 This, the men argue, hurts the federal government’s ability to effectively do its job. 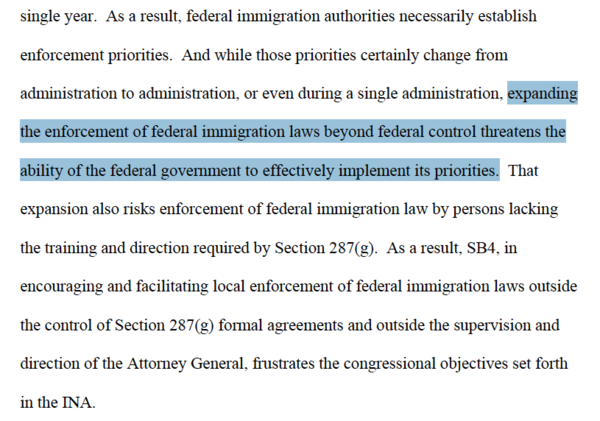 There is no timeline for when the three-judge panel must return a decision.

Until then, the ruling handed down in September, which undid portions of the temporary block, remains in place.

U.S. Customs and Border Protection announced Thursday that it has completed a major step toward construction of the Trump administration’s planned wall on the southern border with Mexico.

How One Family Is Planning For The Possibility Of Deportation

Immigration and Customs Enforcement arrested almost 500 people in just four days of immigration raids last month alone. While that operation did not target Texas, the crackdown has many of the estimated 1.6 million unauthorized immigrants in the state feeling worried.

A 61-year-old truck driver has pleaded guilty to two counts of human smuggling leading to the deaths of 10 unauthorized immigrants in San Antonio earlier this year.

James Matthew Bradley Jr. pleaded guilty to one count of transporting aliens resulting in death and one count of conspiracy, according to a statement released by the U.S. attorney for the Western District of Texas. Bradley faces up to life in prison.