Tens of thousands of Americans die by suicide each year; it is a leading cause of death among working-age men in the U.S. In Colorado, 56 percent of men who die by suicide used a firearm.

Between 2004 and 2017, more people died by suicide in El Paso County, a populated area that is home to multiple military bases and Colorado Springs, than in any other county in the state. Last year, 75 percent of those people were men.

That’s why county health officials are trying to reach men before their crisis point through “Man Therapy.” The slightly crass, tongue-in-cheek public health program lives largely online, in the form of a slick website that aims to first draw in men with funny videos and witty graphics — and then offer them mental health resources.

As part of the county’s campaign to reach men before the crisis point, Sgt. Jason Garrett, with the El Paso County Sheriff’s Office and Kelsey Leva, the Youth Health Development Planner attended a tailgating event on a recent Saturday.

In his role as a supervisor in the Patrol Division, Garrett says that he encounters suicide-related issues daily, oftentimes through welfare check calls that come in through the 911 system.

“That’s a challenge that we as men in Western culture have,” Garrett said. “Being open and honest about what’s going on inside of us and our feelings and allowing ourselves to be vulnerable to those around us.”

“It’s a witches’ brew,” Garrett said.“This collection of factors that seem to just have a catastrophic effect on our area.”

The Origins Of Man Therapy

In 2007, the Colorado Department of Public Health set out to find a new way to reduce suicide numbers among men. Researchers interviewed men who had recovered after a suicidal crisis and conducted focus groups with experts. Information gathered during this two-year research and development period indicated that men often don’t see their problems through the lens of mental health. Thus, one of the recommendations: “Take the mental health language out of the communication, at least initially.”

Years later, in 2012, Man Therapy was born. Other states including Ohio and Arizona, have licensed it, as has the country of Australia. Silicon Valley tech companies have recently expressed interest.

“As you can imagine, stress in that world is off the charts, and getting individuals to reach out for support is a challenge,” Nathaan Demers, Vice President of Grit Digital Health, one of the organizations behind Man Therapy, said.

Despite enthusiasm from many public health officials, the impact of the program is unclear. The Man Therapy website has not hit its pageview goals, a shortcoming that the Colorado Department of Public Health attributes to limited funding.

The state is collecting user feedback and testimonials but doesn’t have hard data yet on program outcomes. The Centers For Disease Control and Prevention is funding a four-year research study evaluating the effectiveness of the program, slated to be published next Fall.

People laughed out loud at the Man Therapy sayings printed on cards that were on display at a recent Air Force football game.

Back at the tailgate, people wander past Leva and Garrett’s table, chuckling at the Man Therapy slogans printed on stickers and beer koozies:

“Sometimes life’s dog takes a dump on your lawn.”

There is a lot more where that came from on the Man Therapy website. Much of the content revolves around Dr. Rich Mahogany, a fictitious doctor described as “part-football coach, part-drinking buddy and 100 percent action hero.” From the homepage, he greets visitors from his leather chair, cleans up his desk with a leaf blower, and cracks up while reading a chainsaw operator’s manual.

“Did you know that men have feelings too? No, not just the hippies. All of us! Hello, I’m Dr. Rich Mahogany,” he intones in one of the video clips on the site. “Welcome to Man Therapy.”

Once they have had their fill of Dr. Rich Mahogany’s videos, visitors can take a mental health quiz, find a therapist nearby and watch testimonials from men who have struggled with their own mental health issues.

“If your ultimate goal is to reduce suicide, you cannot do that in any significant degree without doing something about middle-aged men killing themselves,” Dr. Leon Kelly, Deputy Chief Medical Examiner in El Paso County said.

For the last 13 years, El Paso County has had the highest number of suicides of any county in Colorado.

“El Paso County is our largest county in terms of population so that absolutely plays a role in the numbers that we see,” Sarah Brummett, the Director of Colorado’s Office of Suicide Prevention, explained. “We tend to see higher numbers in our urban counties along the I-25 corridor where more people live and then we tend to have higher rates in our rural and frontier counties. Some counties have both. They have high rates and high numbers. El Paso County is one of those here in Colorado.”

With all of those numbers in mind, Kelly said that previous suicide prevention programs, like crisis phone lines, were not enough. So, the county started looking into new campaigns. 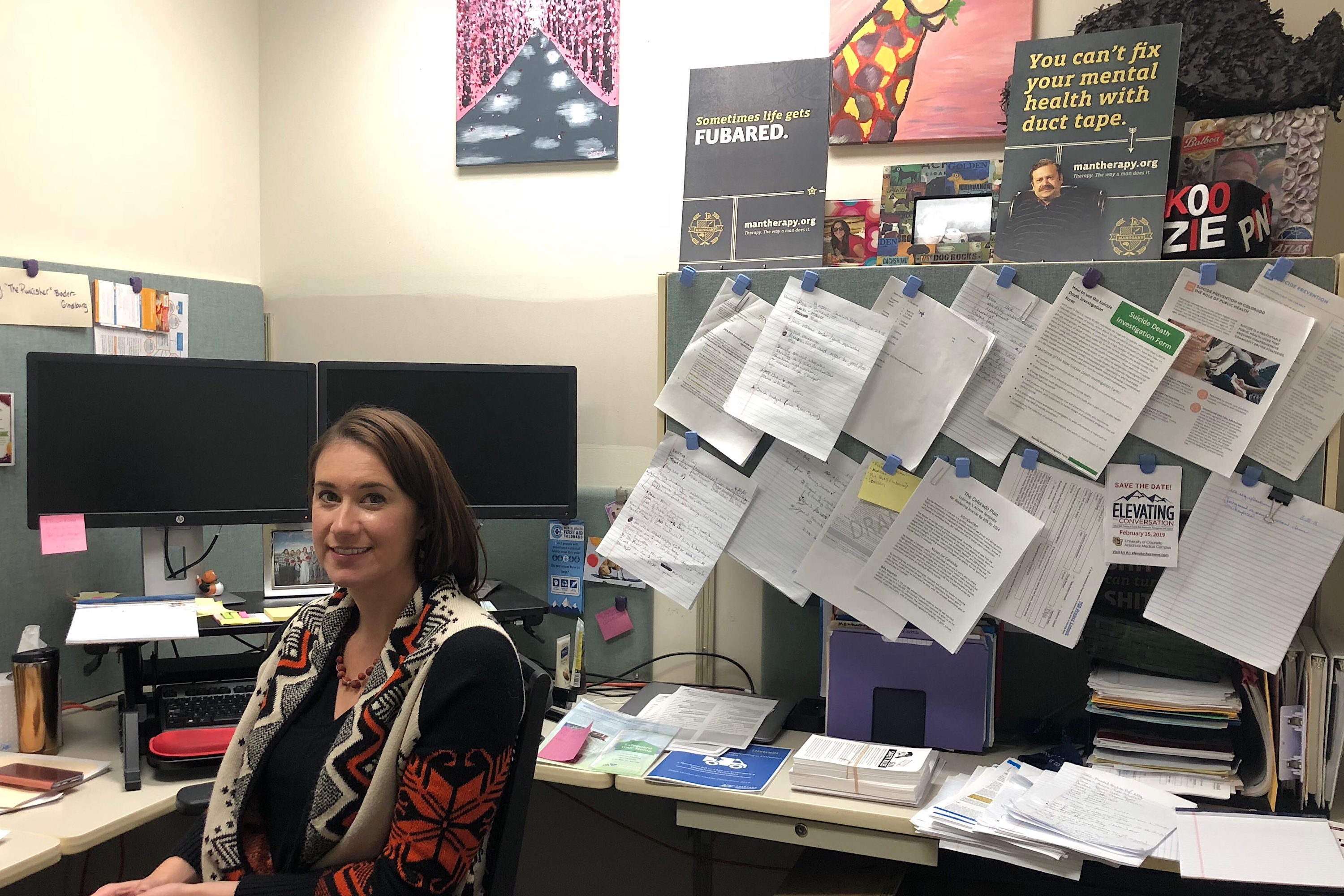 Sarah Brummett, Director of the Office of Suicide Prevention, has Man Therapy materials all over her office, from posters to a fake beer advertisement.

“When we got to Man Therapy it was hilarious,” Kelly said. “It was edgy. It was a little bit profane.”

Some of the decision-makers were skeptical. Afterall, Man Therapy presents one very specific macho kind of manliness.

“Most of the room didn’t get it. They were like, ‘This isn’t even funny,’” Kelly said. “Everybody sees the world differently. That’s the point. This, this right here, this is for men. If that’s what we’re going to focus on, this is how we’re going to reach them.”

Gun Discoveries Are Surging At Airports, And Texas Is Leading The Way

More than 771 million people passed through airport security across the country last year. And mixed in among the liquids and wrapped presents, Transportation Security Administration agents are finding something else in passengers’ carry-ons: thousands of loaded guns.

For Father-Daughter Pair In Oregon, Hunting Is A Chance To Empower And Connect

Tyler Tiller and his 10-year-old daughter, Taylor, sit perched on a log overlooking a fog-encased forest below. They’re just off a mountainous dirt road in western Oregon. The sun is setting and with it, their last chance to shoot a doe this season.

Neither seems to care much. Their excursions aren’t really about hunting.

In 2015, Parkland Hospital in Dallas became the first major hospital system in the country to screen each and every one of its patients for suicide risk — at each and every visit. In March, the hospital extended those screenings to children as young as 10.

After NRA Mocks Doctors, Physicians Reply: 'This Is Our Lane'

A mocking tweet from the National Rifle Association has stirred many physicians to post on social media about their tragically frequent experiences treating patients in the aftermath of gun violence.