Update: A federal judge in Austin has denied a request by the Brady Campaign to Prevent Gun Violence and other gun control groups to block Defense Distributed from posting plans for making 3D-printable guns online.

The Brady Campaign called the ruling disappointing, but said the fight wasn't over and urged the State Department to act.

"We will do everything in our power to make sure that untraceable downloadable guns remain nothing more than an idea," co-president Avery Gardiner said in a statement. "To those who want to see this dangerous concept become reality, all we have to say is this - not on our watch.”

Austin-based Defense Distributed plans to launch an online database Wednesday of downloadable blueprints for a wide variety of guns that can be 3D-printed or milled at home. It's the culmination of a five-year court battle that pits free speech claims against the government's ability to control distribution and export of the means to produce firearms.

Cody Wilson made his first 3D-printed gun in 2013 – a single-shot pistol fabricated from resin that he called the "Liberator." He published the plans online; anyone could download the plans and print their own untraceable, plastic gun – with the right equipment.

Days later, the U.S. State Department warned Wilson that he was in violation of the International Trade in Arms Regulations, or ITAR. Wilson took the plans down, but sued the government, claiming it was a violation of his First Amendment rights.

The case wound its way for years through the courts. In April, the government settled with Wilson and his company, clearing the path for Defense Distributed to publish the Liberator plans – and plans for dozens of other weapons – for free on its website.

Wilson says his project has – at least symbolically – ended gun control in America.

But the Brady Campaign to Prevent Gun Violence and other gun control advocacy groups filed an emergency motion today in federal court to prevent the designs from being posted. The groups called the settlement dangerous and potentially illegal, and said it did not protect the nation's national security, foreign policy and anti-terrorism interests.

The City of Los Angeles has also indicated it will join the effort to block the settlement. The New Jersey Attorney General has said he will sue Defense Distributed if it releases the files.

On the day I visit, Wilson wears a black polo shirt and round, black sunglasses. A toothpick hangs out of his mouth.

In the back of the Defense Distributed building, he's creating a library. DVDs, bookshelves lined with books, a microfiche machine, a server rack, drones and a bunch of rifles and handguns litter the space. He leans back on a couch as he explains his motivations and what he's been doing.

Wilson says his work on this project began in 2010 and 2011, when the online transparency site WikiLeaks published thousands of diplomatic cables from U.S. officials. He wondered: What is WikiLeaks for guns? What would that look like?

"You know," he says, "could the internet ever serve on-demand firearms or at least in a way that permanently undermines or subverts the common channels by which we expect guns to be delivered to the people?" 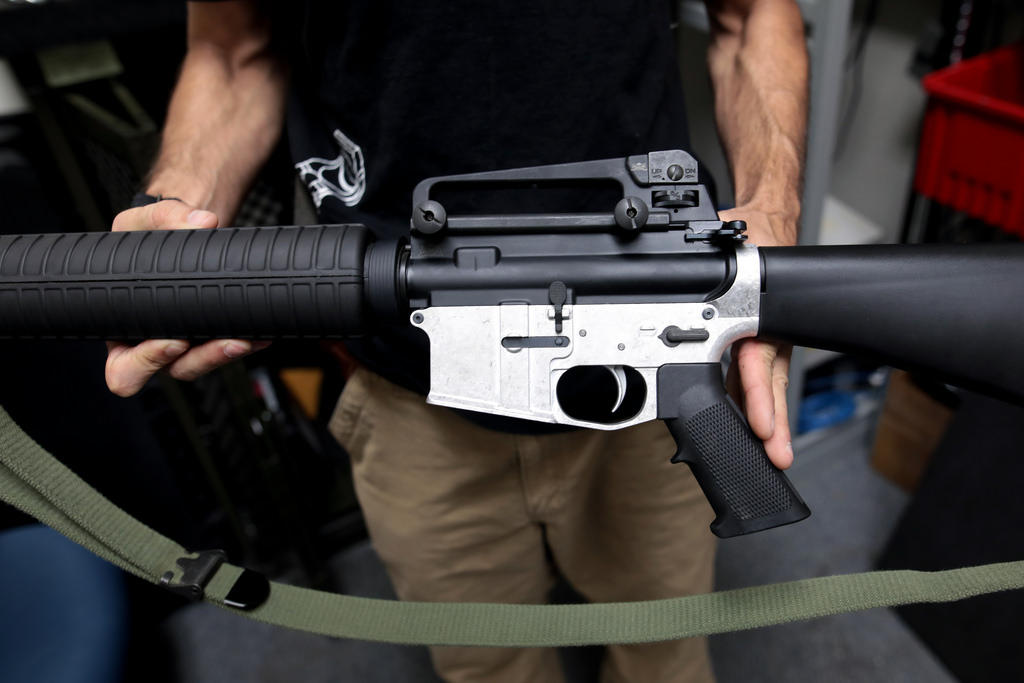 Wilson speaks in grandiose and heady terms about the "global power elite," the political scientist Francis Fukuyama and the idea that liberal democracies are the endpoint of political evolution — but that people yearn for something else. He points to Brexit and Donald Trump as evidence that change is afoot. (Wilson says he did not vote for Trump – that he does not vote – but that he is happy Trump is president, as opposed to Hillary Clinton.)

"At the end of the day, it's not even a contempt more than it is an ennui – a boredom," Wilson says. "Being sick of things as they are. Stuck."

He sees his gun project as part of this.

"The internet allows you to puncture this – punch through this. Disrupt this, is probably the best word," he says. "I think the printable gun is a measure or at least an indication of this potential disruption."

Wilson calls himself a "radical libertarian" and an anarchist, though he has had connections with the "alt-right." Last year, he launched a crowdfunding website called Hatreon – a play on the site Patreon, which has strict hate-speech rules and has booted some far-right figures off the platform. They were welcomed on Hatreon. Wilson told Newsweek last year that he didn't plan to put many resources into the project; it's been unable to take donations since February.

His main focus is on the gun project.

"Obviously, power begins at the implements of power," he says. "And there's no better in 20th and 21st century discourse than the firearm."

Of course, this all makes many people extremely nervous. After all, printing an untraceable firearm – from a plastic pistol to an AR-15 rifle – could put these weapons in the hands of people who mean to do harm, from international terrorists to domestic criminals.

"We have laws to keep guns out of the wrong hands – to require background checks when you buy guns at gun stores," says Jonathan Lowy, the vice president of litigation at the Brady Center. "That can be completely undercut if somebody can simply buy a 3D printer and crank out an AK-47 or AR-15 in their basement."

The Brady Center filed a motion to block Defense Distributed's settlement with the State Department. It asked the court to prevent the launch of the site until its claims are decided in court.

"The government for five years went into court and rightly talked about the tremendous danger to national security and international peace that was created if you posted plans for anyone to make their own assault weapons or guns," Lowy says. "The State Department has maintained the position that this is very dangerous and, yet, now it's going to allow it to happen."

For his part, Wilson says he gets why people feel uncomfortable about what he's doing – but he isn't sympathetic.

"Sometimes it's uncomfortable to be responsible or move into a new age of technical possibility," he says. "I suppose, then, people's feelings are kind of beside the point."

He knows what he's doing is provocative and disruptive.

"That's been my primary contribution – the ability to politically exploit these things."

The crux of Defense Distributed's case against the government was about the First – not the Second – Amendment. The company argues that rules blocking the publishing of these files on the internet represents an unconstitutional prior restraint on Wilson's free speech rights.

"Part of the issue in this case is the question of whether a computer file can be speech that's protected under the First Amendment," says Kit Walsh, an attorney with the Electronic Frontier Foundation, who filed a brief in support of Defense Distributed during the federal court proceedings. Walsh says computer code is a set of instructions – like a recipe – and that the code for these gun blueprints simply describe shapes.

"The law at issue here violates every one of those safeguards that are designed to make sure that when you have this kind of censorship system, it's not run in a way where the government can say, 'Oh, we don't like Cody Wilson, so he's not allowed to talk. But our buddies would be allowed to talk about the same topic,'" Walsh says.

The State Department did not make anyone available for an interview for this story, but in a statement, a spokesperson explained that the department decided to settle the case after developing new ITAR regulations over the past few years.

"In addition to reducing regulatory burden on U.S. industry," the statement reads, "these proposed regulations would eliminate the ITAR requirements at issue in this case, including the ITAR requirement to obtain U.S. Government authorization to post to the Internet technical data related to certain firearms and related items that are commercially available, such as those at issue in this case."

Defense Distributed's headquarters – next to the train tracks in a North Austin industrial park – is almost invisible from the outside. There's no signage, just tinted glass doors. Inside, about a dozen employees are working on various projects. They're hand-making components for a machine called the "Ghost Gunner." The bread-box-sized milling machine can be used to finish partially fabricated gun parts – which are also being boxed up for shipping to customers. The company makes and sells about 10 of these Ghost Gunners a day, Wilson says. 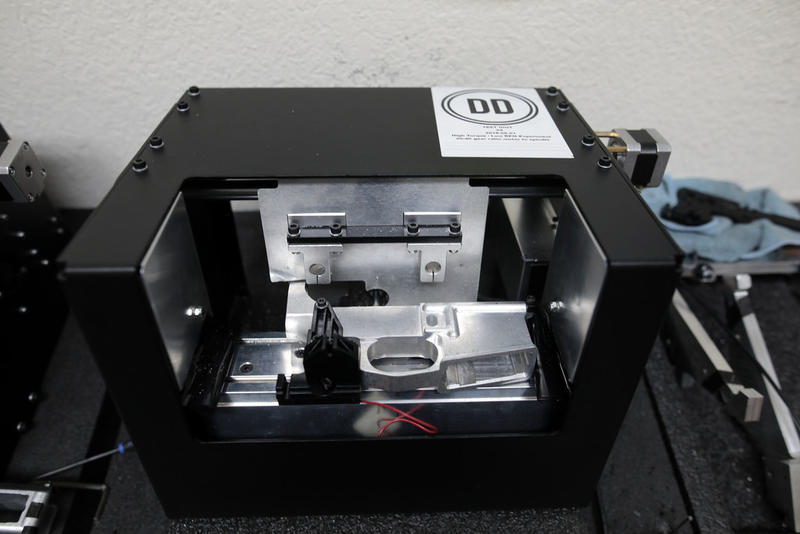 One employee is working on the specifications for an exotic-looking revolver-type pistol that can be 3D printed out of resin.

There's also a customer service department – all of it in service of Wilson's big idea: that people should have access to the raw materials of their Second Amendment rights.

"In essence, it's only giving you the assurance that you can begin," he says. "Should you ever want to make the AR-15, you know you can. And there's three or four different ways you can do it. And I know that no matter what, I helped make that possible – or at least lowered that barrier of entry."

As for whether this will mean everyone will have access to guns – whether they would be otherwise barred from having one – Wilson doesn't see it that way. He contends that for someone intent on harming someone, it's quicker and easier to buy a gun on the black market. He also points out that people have been able to legally make guns at home for a long time.

"There already are as many guns as people in this country, right? I mean, your nightmare scenario is here," he says. "You can literally trip over like eight guns in this room and none of them were downloaded."

As for whether he'd feel responsible if someone did use a gun built with his downloaded plans to hurt or kill someone:

"I suppose," he says. "I think it would depend. Everything is situational, right? Based on the facts."

I ask Wilson about the role he sees himself playing in these events. Does he see himself as a hero? An anti-hero? He says he's surprised he's even been involved in it this long. He thought someone else would do it first.

"I have no particular will to turn this into a narrative about me in history," he says “I think the result now from this decision … is most people will assume that you could always download guns on the internet. ... I think people will just see downloadable guns as part of the early history of the internet, and I doubt I'll have much of a legacy in that." 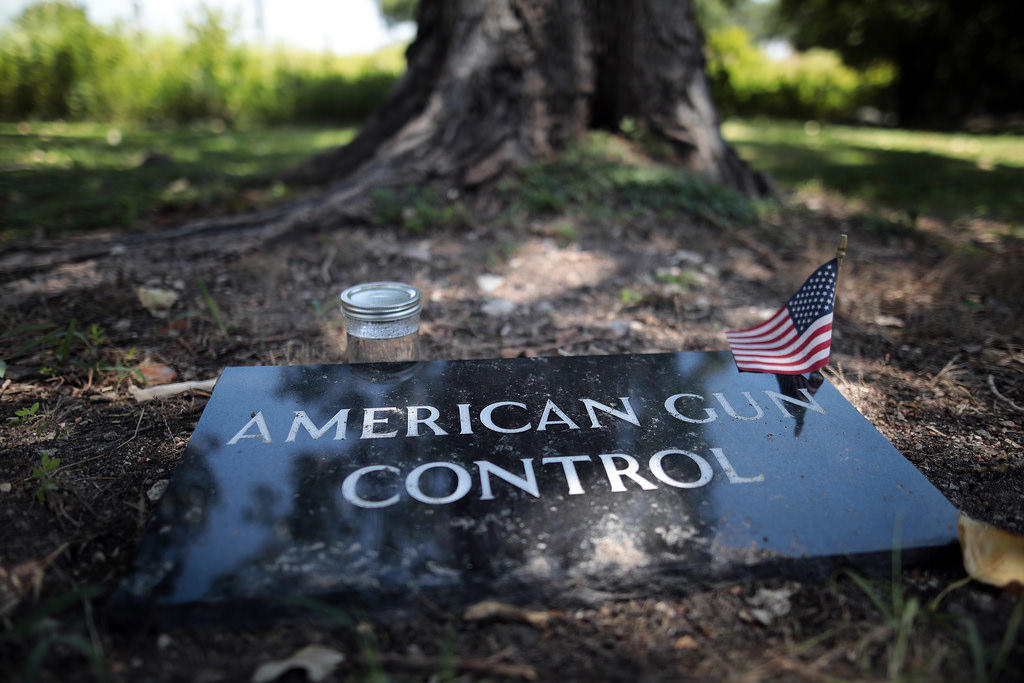 Underneath a tree behind the Defense Distributed building, there's a polished granite headstone that reads: "AMERICAN GUN CONTROL."

Surprisingly, Wilson says he does, in fact, believe in a measure of gun control. He says he's fine with local communities deciding – by consensus – what types of weapons they will and will not allow. His fight is with federal gun control. And unless gun control groups succeed in blocking his website – he's won this round.

CORRECTION: A previous version of this article misidentified Kit Walsh as "he."

A coalition of gun-control groups has filed an appeal in federal court seeking to block a recent Trump administration ruling that will allow the publication of blueprints to build a 3D-printed firearm.

Talking Guns Over A Cup of Coffee: Two Very Different Takes On The NRA in Dallas

With the National Rifle Association's annual meeting kicking into high gear today in Dallas, KERA sat down for Friday Conversations with two women on opposite sides of the gun debate.

Losing an arm or leg is devastating, and replacing that missing limb with a prosthetic can be expensive. 3D printing is making it easier to create useable prosthetics quickly and much more cheaply.