The Southwest Workers Union and members of the San Antonio community gathered Friday to protest Fox News’ “Battle at the Border,” a town hall event centered on border security and immigration issues.

As panelists like “Fox & Friends” host Brian Kilmeade and “Fox Nation” host Tomi Lahren prepared to address event-goers at the JW Marriott Hill Country resort, a crowd of about 15 people assembled along a road near the entrance. Security officials gave them five minutes to disperse, then drove away and did not return.

Some protesters waved signs while others chanted, “Raise up your fists. Resist. Resist,” and “Hey, hey, ho, ho, Fox News has got to go,” and “No racist law; no border wall.”

In a news release, Southwest Workers Union, which organized the demonstration, said the “Battle at the Border” event “reinforces the false narrative of an alleged border community in chaos that is both incorrect and not a reflection of our reality.”

Citing the current levels of undocumented immigration into the U.S. and the low crime rates of migrant populations, the union noted: “Fox News and speaker Tomi Lahren are not from our community nor do they speak to our experiences. The framing of this dialogue and attempts to explain the situation is both detrimental to our neighborhoods and dangerous.”

Standing with a sign that read, “No al muro (no to the wall),” Laeree Lepo shared her thoughts on the event.

“It’s misrepresentation all around. ...It’s buying into that clickbait: ‘Trump said something so let me go ahead and ride those coattails.’ ”

Beto De León, a member of the environmental justice team within Southwest Workers Union, said he came to defend his community and the border region, which he feels is being exploited for policy reasons.

“Right now, they’re in there talking about a wall to separate us from Mexico. And, for a lot of our community members, we don’t feel that that’s just or a solution to fix any of the problems that they’re exploiting for their own nationalist agenda,” he said. 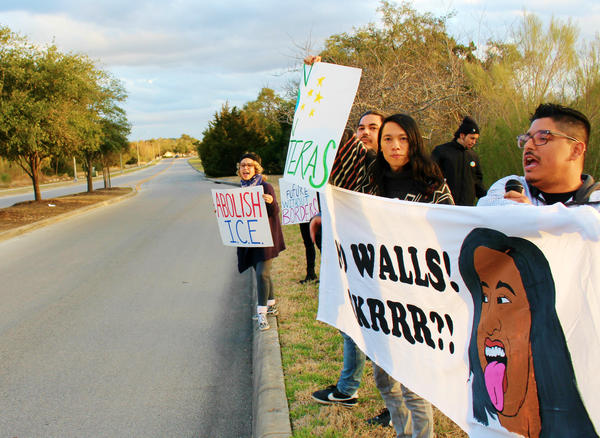 Diana Lopez, one of the protest organizers, said “Battle at the Border” helped her develop a better understanding of national media and the role they play in public opinion.

“Being here in spaces where people aren’t from San Antonio, they’re not from the border, they don’t understand the context — and they criminalize everything that has to do with the border — it’s very intense and very false,” Lopez said. “I think that’s an important role that’s played by national media, to control the story and portray a vision that’s very skewed and different from what the reality is.”

She also critiqued the resort venue chosen for the event, noting that was more than 100 miles from the border and separated from community dialogue.

“How could they really understand the realities of what’s happening if they’re not actually on the border and coming into the communities? And knowing what the stories are?”

The panel discussion will be aired on Fox News Channel at 7 p.m. Sunday and again at 10 p.m.

Carson Frame can be reached at carson@tpr.org or on Twitter @carson_frame

As President Donald Trump travels to the border in Texas to make the case for his $5.7 billion wall, landowner Eloisa Cavazos says she knows firsthand how the project will play out if the White House gets its way.

President Trump spoke to the centennial gathering of the American Farm Bureau Federation Monday, cultivating ties to rural voters who were a key factor in his 2016 election.

"I'm proud to be a great friend of the farmer," Trump said, addressing the group's convention for the second year in a row.

The president drew applause as he recounted administration efforts to reduce regulation and save the very wealthiest farmers from the estate tax.

The Trump administration's treatment of more than 10,000 immigrant children held in custody at shelters across the nation is coming under intense scrutiny. Numerous lawsuits claim the government is using the system of child confinement as a way to punish and deport kids and their families.

President Donald Trump's Hail Mary offer to trade protections for recipients of the Deferred Action on Childhood Arrivals program for border-wall funding could be dead on arrival as Congress heads back to work this week.