Beatrix Lestrange stood before a crowd of protestors near in a Brownsville park, ready to fire them up and ignite this demonstration against the border wall project. Catching their attention was not a problem. Lestrange wore a multicolored dress, a red wig, black pumps and a choker with studs.

“Who’s ready to have a political time?” Lestrange yelled out. The audience, standing in a semicircle and dressed in similarly vivid outfits, cheered and applauded.

“We’ll try to bring joy, positivity, beauty, drag, culture to whatever this is,” Lestrange said, pointing to the section of wall directly behind her.

Drag queens traveled from throughout the Rio Grande Valley to participate in the No Border Wall Drag Show Organizers. Participants said the goal was twofold: to demonstrate to people that there is no border crisis and to oppose the border wall project.

Lestrange organized the protest show and is a self-proclaimed dragtavist, a drag queen committed to social activism.

“The vision was to perform in front of this wall and project our beauty and our glamour and our empowerment against this symbol that stands for hate, racism and xenophobia,” Lestrange said. “All of these things that aren’t really happening in our community.”

As Lestrange set up the music, the participants lined up and prepared their performances.

Michelangelo De Vinci, whose real name is Sabino Ponce Jr., said this moment had personal resonance for him. His dad was once undocumented.

“I know his struggle coming over and how he built himself from the ground up with his third grade education,” he said. “There are other people who are trying to come over here and do something better for themselves and their families -- my dad being one of them and these other people as well -- so they should get a chance to live here also.”

Arina Heys, whose real name is David Bocanegra, wanted to participate to showcase the beauty of the Latin culture in the region.

“We get painted as this one negative picture,” the performer said. “We are just like any other community, and it’s extremely family-oriented. It’s lovable, humble and welcoming.”

Jorge Trujillo, a professor at the University of Texas Rio Grande Valley, was among the spectators. He said the drag show exemplifies how the Rio Grande Valley is the United States at its finest. 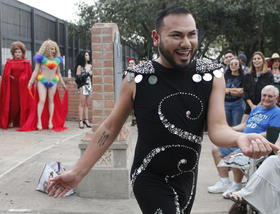 “We need to continue that movement and let people never forget that there is never been a more perfect opportunity to be Valley proud,” Trujillo said.

Lestrange wanted the protest to symbolize their solidarity with LGBTQ asylum seekers. She hoped their performance brought some awareness to the issues trans and queer migrants face.

“I get teary eyed and emotional every time," she said, "because they’re already fleeing really horrible conditions. They’re fleeing homophobia, transphobia, violence, trauma, only to come to the doorsteps of our country and encounter more of that."

In less than two hours, the drag queens raised about $650. All the proceeds will go to local organizations that work with LGBTQ asylum seekers.

Lestrange also wants to challenge other queer communities across the country to participate in their own form of activism.

“If we can do this in front of the border wall, then they can do something similar,” Lestrange said. “Do it now because tomorrow is too late.”

When the Texas Legislature gavels into session next week, Julie Johnson will make history. She'll be one of Dallas County's first two openly gay legislators — and the first state House member with a same-sex spouse.

The city of Dallas made history this month as the first Texas city to get state recognition for its LGBTQ neighborhood. An official historical marker was installed in front of JR’s Bar & Grill in Oak Lawn.

Dallas will make history Wednesday as the first Texas city to get state recognition for its LGBTQ neighborhood.

Tonight at 7, the Texas Historical Commission will unveil a historical marker in front of JR’s Bar & Grill in Oak Lawn — the heart of the gay and lesbian community in Dallas.

A group of 16 states has filed a lawsuit in a Northern California federal court against President Trump's declaration of a national emergency, calling the president's decision to use executive power to fund a border wall unconstitutional.