The Confederate Plaque In The Texas Capitol Will Be Removed

A plaque honoring the Confederate States of America in the Texas Capitol will be taken down after a vote from the Texas State Preservation Board.

In a meeting that lasted all of three minutes, board members unanimously approved the measure to remove the plaque, which was installed in 1959, though it's unclear when exactly it will be taken down.

The plaque came under scrutiny in 2017, when Dallas state Rep. Eric Johnson called for its removal because it says slavery wasn't an underlying cause of the Civil War. The plaque features the so-called creed of the group Children of the Confederacy and claims the Civil War was not a rebellion.

After the hearing, Johnson said the plaque's removal is long overdue. 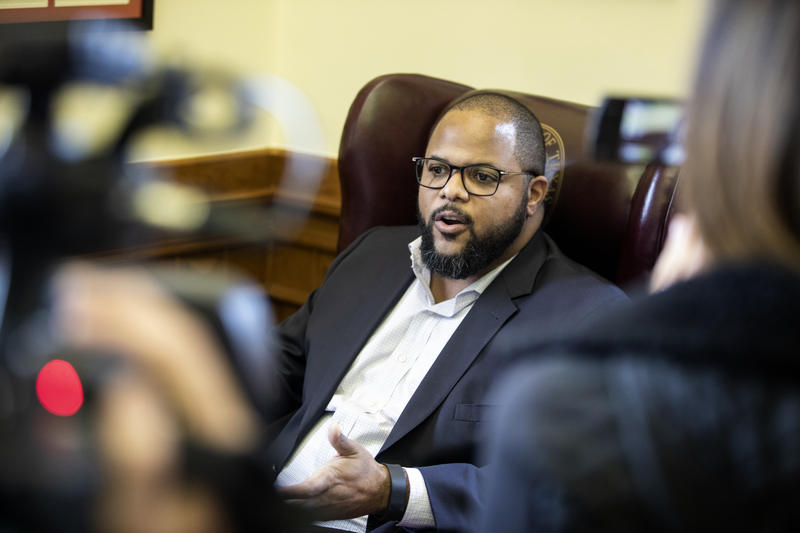 "This is really not a time to pat ourselves on the back. We didn't do a very good job over the past 60 years of dealing with this," he said. "It's unfortunate that it went up in the first place. It was never true. ... But, certainly, we've had 60 years to deal with this and ... this doesn't belong on the doorstep of any one party. Democrats and Republicans alike have walked past that plaque for 60 years and done nothing."

Johnson's campaign to remove the memorial garnered bipartisan support from lawmakers – including then-House Speaker Joe Straus – and he even met with Gov. Greg Abbott to discuss its removal in October 2017. Abbott is a member of the State Preservation Board, along with newly elected Texas House Speaker Dennis Bonnen and Lt. Gov. Dan Patrick. 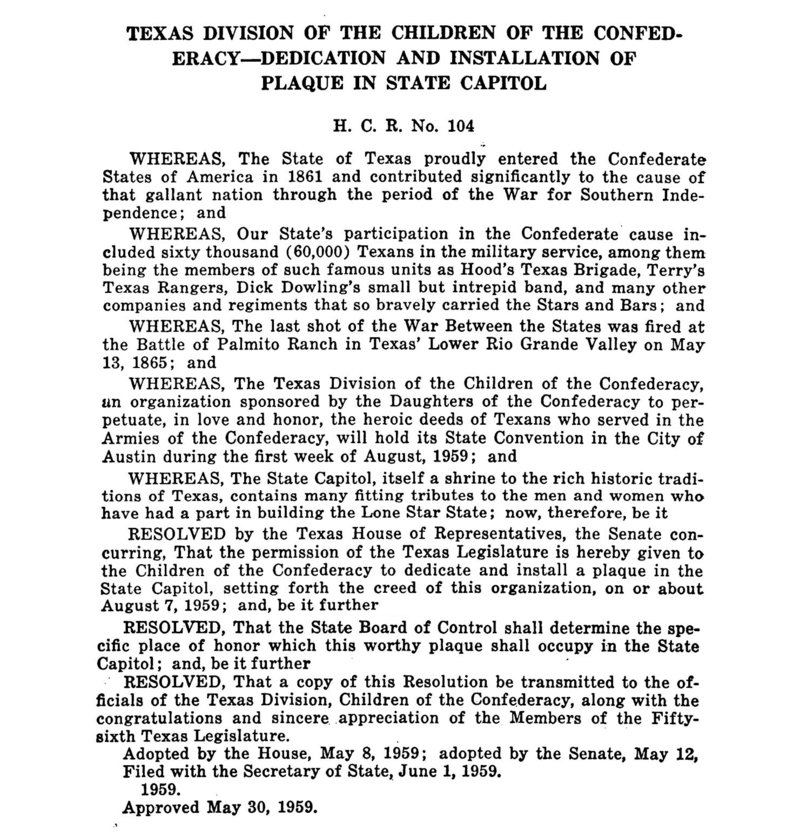 In a November opinion, Attorney General Ken Paxton said lawmakers had the authority to remove the plaque, as the resolution that authorized it on behalf of Children of the Confederacy didn't prevent lawmakers from removing or relocating it. The resolution does say the state should "determine the specific place of honor which this worthy plaque shall occupy."

Those who opposed the plaque's removal said doing so would erase Texas' history. Misourri-based Conservative Response Team said it launched a barrage of 100,000 robocalls targeting lawmakers to save the plaque.

It should be noted, Texas' declaration of secession in February 1861 explicitly cites slavery – and the desire to continue practicing slavery – as a reason to leave the United States, according to the Journal of the Secession Convention of Texas:

[Texas] was received as a commonwealth holding, maintaining and protecting the institution known as negro slavery--the servitude of the African to the white race within her limits--a relation that had existed from the first settlement of her wilderness by the white race, and which her people intended should exist in all future time.

Last fall, the Texas State Board of Education voted to amend its curriculum to reflect for the first time that slavery played a "central role" in the Civil War.

This story has been updated.

Texas lawmakers are expected to look at a range of criminal justice issues during the 2019 legislative session. Criminal justice reforms have been a bipartisan bright spot for a decade in Austin, as conservative and liberal lawmakers have sought to reduce the number of people behind bars, increase public safety and cut costs.

School Finance Reform: What To Expect During the 2019 Legislative Session

After failing to pass legislation to reform public school funding in 2017, state leaders have pledged to make it a top priority this legislative session.

The Texas Public School Finance Commission spent 2018 creating a roadmap for lawmakers to enact that reform, but key questions remain.

Amid continued scrutiny over how lawmakers handle reports of sexual misconduct by their colleagues, members of the House on Wednesday approved a measure that will strengthen the way the chamber addresses complaints of sexual harassment.

The Texas Department of Motor Vehicles has denied a Confederate group's latest attempt to create a specialty license plate celebrating Confederate soldiers, a design that does not include the Confederate battle flag.