There are enjoyable ways to walk or bike across Lady Bird Lake, but the Pleasant Valley Bridge is not one of them. A narrow sidewalk, a chain-link fence and low guardrails are features that make the East Austin crossing unsafe.

For years, the city has floated ideas to improve the crossing, with no results. Now, an effort is underway that may eventually lead to a whole new pedestrian bridge.

That initiative was kicked off last week at a public meeting at Fiesta Gardens, where the Transportation Department asked for input on potential new crossings. There were poster boards for residents to write down input and maps to draw their preferred locations.

“We’re trying to understand what alignments we should study and how people need to move, so we’re asking ... 'If you have a dream alignment, what would it be?'” said Nathan Wilkes, the transportation planner in charge of the project. “It’s important to get this right, and it's a once in a lifetime opportunity.  We’re not going to build a bridge after we build a bridge.”

While attendees were asked to let their dreams run wild, some options seemed more likely than others.

One suggestion was a bridge some distance from the current crossing at Pleasant Valley Road, running from the Peace Point peninsula on the south shore – near the new Oracle campus – across the lake to Festival Beach on the north side.

Another possibility was putting a bridge just up- or downstream of Pleasant Valley Road.

“Widening the existing bridge would be our fourth [option],” Wilkes said.

Each of these options comes with challenges. Those challenges come into focus when you take a look at the structure the current bridge sits on: the Longhorn Dam.

The dam has a long history of mechanical problems. Wilkes said any new bridge on or near that structure could be complicated by work the city needs to do on the dam.

A new bridge right upstream from the dam would also need to be up to 17 feet above the usual lake level to protect it from flooding. 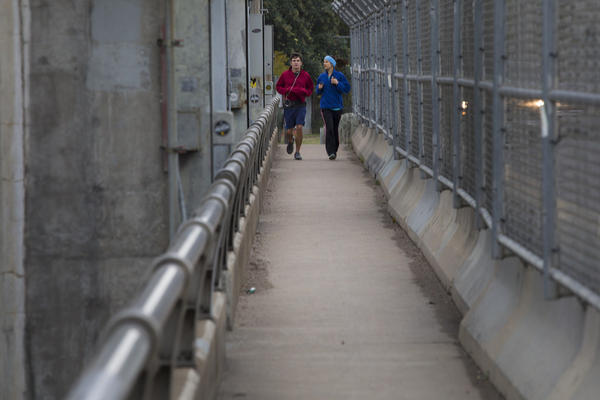 There's also the question of what location will get the most community support.

A few years ago, the Parks Department floated a plan for a bridge upstream of the dam, which was similar to the Peace Point option presented at the meeting. That proposal met with resistance from neighborhood groups, who ended up backing a different plan to attach a bridge to the existing dam.

It appears some still view the proposal for a bridge near the Oracle campus as part and parcel of East Austin’s gentrification, though that didn't come up at last week's public meeting.

Attendees of the meeting seemed to overwhelmingly support the project, though there was disagreement over the type of bridge to build.

“I would love to see an incredibly designed, artfully minded bridge," said Rose Warren, a transportation consultant who lives nearby.

“I would like a fast option," said Anna Kehl, who also lives in the neighborhood, "something that could be done quickly and that could be utilized soon."

But right now, the debate over cost is highly theoretical. The fact is, funding is still years away – if it comes at all.

“One thing I did find out is [there's] no funding. ... So, [we're] moving forward!" chuckled longtime Eastside activist Gavino Fernandez.

The Transportation Department plans to review community input and hold a second public meeting.  Then it will come back for a third event before it starts looking for funding.

In the meantime, the city is looking at fixes to the Longhorn dam crossing that it could implement sometime within the next year.

A week after firefighters from across Texas were deployed to fight devastating wildfires in California, Austin Fire Department crews learned Monday they should be home in time for Thanksgiving dinner.

Austin led Texas in the number of hate crimes reported last year, according to FBI data. The FBI’s 2017 hate crime statistics data show the state capital had 18 total incidents, marking the third year in a row the city saw hate crimes in the double digits.