3 Things Texas Could Do Better Before The Next Hurricane Hits

Chemical plants and oil refineries spewed millions of pounds of toxic chemicals into the air and on the ground after Hurricane Harvey struck Texas a year ago. Some parts of the state did a better job than others in controlling those emissions and spills, according to a new report that tries to take lessons from Harvey to better prepare for the next storm.

The analysis, from the Environmental Integrity Project, looks at mandatory pollution reports companies filed. It found that something went wrong when it came to the monitoring and managing of toxic emissions during Harvey.

Here are some of the findings.

In preparation for the storm, oil refineries in Corpus Christi shut down before Harvey made landfall. That was the right call, according to the report. It probably helped Corpus Christi avoid a situation like what happened in Houston, where plants didn’t shut down the storm hit.

“Many of those [in Houston] were emergency shutdowns and that always comes with more pollution,” says Ilan Levin, who directs the Environmental Integrity Project in Texas.

In other cases, facilities in and around Houston were damaged or even destroyed, causing greater harm to the environment and public health.

The report urges preemptive, better-coordinated closures at vulnerable plants to stop this from happening.

Harvey caused at least 8.3 million pounds of unpermitted air pollution from petrochemical plants, much of it dangerous to humans. But officials frequently downplayed the risk of those emissions and offered “broad assertions that the air quality was not a danger,” says Bakeyah Nelson, executive director of Air Alliance Houston.

The report finds that officials should better monitor and communicate the risk of air pollution.

“At a minimum, a disaster-based air-quality-monitoring plan should be developed to monitor the air near communities that are closest to these facilities,” Nelson says. “Facilities within close proximity to residents should be held to a higher reporting standard.”

At least 400 storage tanks for gasoline and other petrochemicals in the Houston area have what are called floating roofs, “where the top of the tank floats on the liquid itself,” Levin says. 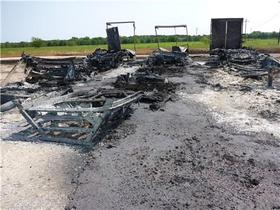 At least 15 of those storage tanks failed during Harvey, spilling pollutants.

The report recommends that “refineries and petrochemical plants invest more in the best available pollution controls.” That includes improving the storage of dangerous chemicals.

The report comes as the EPA begins its own investigation into the state and federal monitoring of air pollution during and after Hurricane Harvey.

When Disaster Strikes, This Fort Worth Nonprofit Helps Reconnect Communities

It's been six months since Hurricane Harvey struck the Texas Gulf Coast. The Fort Worth-based nonprofit Information Technology Disaster Resource Center (ITDRC) was among the organizations helping residents in the aftermath, rebuilding internet and phone connections.

It's summer in Texas, and that’s got many people heading for their nearest pool, or, as tradition has it, the Gulf. But one of the state’s most beloved beach getaway destinations, Port Aransas, took what amounts to a direct hit from Hurricane Harvey in August, and the town’s still bouncing back.