A report last month found lapses in the state’s ankle monitor policies, which it said led to the three deaths, including a shooting inside Dallas Methodist Medical Center that killed two.

Gov. Greg Abbott has called on state lawmakers to enact tougher penalties on manipulating ankle monitors in the wake of two recent Dallas killings police say were committed by people out on parole.

Abbott called for the tougher measures in a letter to Texas Lt. Gov. Dan Patrick and Texas House Speaker Dade Phelan, in which he called current policies “ineffective” at preventing violent crime.

"Based on the report, it is clear that legislative action is needed,” Abbott wrote. “Currently, there are no criminal consequences for a parolee cutting off an ankle monitor. Texas cannot allow violent criminals who jeopardize public safety back into our communities.”

Neither Patrick nor Phelan responded to a request for comment.

The letter follows a report last month by the Texas Board of Pardons and Paroles and the Texas Department of Criminal Justice which found lapses in the release and parole supervision of two men who were later accused of killing three people.

Nestor Hernandez was arrested for allegedly killing two people in October. He was required to wear an ankle monitor while living under the supervised care of a family member. Before his most recent arrest, the report says he had a history of cutting off his ankle monitors.

Hernandez was wearing the monitor but had permission to attend the birth of his child at Methodist Dallas Medical Center on Oct. 22, when police say he started fighting with his girlfriend. A Dallas police report said Hernandez claimed she cheated on him, then produced a handgun and assaulted her. The report said he shot social worker Jacqueline Ama Pokuaa who entered the room to provide routine patient services, and then shot nurse Katie Annette Flowers when she looked inside the room.

The report showed Hernandez was non-compliant with his release obligations, including requirements to attend anger management and aftercare support groups. His parole officer failed to document this or elevate Hernadez’s sanctions as required, according to the report.

Following a failed drug test, the report says Hernandez was told to attend addiction support groups but was not referred to outpatient treatment.

The parole officer who supervised Hernandez’s release is no longer with the agency, according to the report. Five others were also implicated in the lapse in monitoring. Only two remain employed by the agency. Two quit, two were disciplined, and a fifth was recommended for dismissal.

Zeric Jackson was arrested in November for allegedly killing a man in Dallas. Police say Jackson followed his girlfriend home, where he found Brian Dillard. He then entered the home and shot and killed Dillard, police say.

Jackson was out on parole, which was approved on April 1, 2022, after he served 95% of his 18-year sentence for aggravated robbery. Conditions of his parole included participation in the Super Intensive Supervision Program, or SISP, the highest level of supervision offered. All participants in SISP are monitored with GPS technology.

On July 15 and August 11, Jackson had two violations, according to the report – both of which were determined by his parole officer to be equipment malfunctions. During its investigation, TBPP and TDCJ found that Hernandez totaled 16 violations, during which he deviated from his approved schedule to visit his girlfriend.

The report notes that removing ankle monitors is currently an administrative violation but not a criminal offense, and that “enhancing the penalties may act as a deterrent and dissuade those already on heightened supervision from attempting to evade supervision.”

The report also recommended requiring law enforcement to prioritize the arrest and apprehension of SISP clients by using warrants to expedite those arrests.

In their closing, Collier and Gutierrez said their agencies would work collaboratively to find solutions.

“While separate agencies, both TDCJ and BPP share the same mission, public safety,” they wrote. “We recognize the importance of our role in the Criminal Justice System and strive to carry out our missions to ensure public safety.” 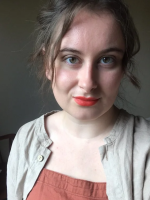 Katherine Hobbs
Born in London, Morning Producer and Podcast Host Katherine Hobbs has lived across the U.S. since 2001. Prior to joining KERA, she produced three podcasts for WJCT Public Media and Florida Public Media and wrote for Jacksonville Magazine, Autism Parenting Magazine and EU Jacksonville, among others. Katherine is thrilled to return to Texas after briefly living in Austin to share the stories that impact our North Texas community. When she’s not working, Katherine can be found admiring public libraries and visiting penguin colonies around the world.
See stories by Katherine Hobbs
The best stories from KERA sent to your inbox.
SUBSCRIBE
Related Content