We can rebuild him. We have the technology.   We can make him better than he was before.  Better.  Stronger.  But might we also think about making him ... browner?

As we all continue to digest the news of the demise of Big Tex — beloved symbol of the State Fair of Texas, but also of our larger-than-life pride in our state — social and traditional media are abuzz with both sincere tributes to his legacy and a fair amount of gallows humor.  The reason we can laugh is that as much as we loved him, we all know that he can and surely will be rebuilt.

The Lone Star State’s most famous cowboy had been a commanding presence at Fair Park since 1952, when his $750 skeleton was purchased from the chamber of commerce in Kerens, Texas.  He’d spent a few Christmases in the town square there billed as the world’s tallest Santa Claus, but only grew to worldwide fame when we installed him at Fair Park.  Nearly every Texan to visit the fair has photographed him, and I think it’s a safe assumption that thousands of us have measured the growth of our children over time by the changes in the annual photographs we took of them in the big guy’s formidable shadow.

In his 60 years as the symbol of the State Fair of Texas, Big Tex was treated to several new outfits, high-tech structural reinforcements, and -- like many prominent Dallasites before and after him -- more than one round of plastic surgery.  So surely the plans exist to remake him to the same grand scale as before.

Ladies and gentlemen, we can rebuild him. We have the technology.   We can make him better than he was before.  Better.  Stronger.  But might we also think about making him browner?

When Big Tex was first installed, the entire population of the state was just under 8 million people and over two thirds of them were of European ancestry.   By last year, that overall population had grown to 25.7 million, with 38.1 percent reporting Latino ethnicity, 12.2 percent African American, 4 percent Asian, and 1 percent Native American. Also, 1.7 percent of us identify ourselves as two or more races.  We have moved to the state by the millions from six continents, bringing with us new ideas to season and enliven longstanding traditions.

These demographic changes have contributed to a Texas that is culturally rich, economically vibrant and well-positioned to face a highly globalized future.  There is room for all of us under the brilliant Texas sun, and our population is expected to continue strong growth well into the middle of this century.

So perhaps we should keep this in mind as we await details for the “new” Big Tex… who if he is to reflect the dynamic changes in the state is more likely to have brown skin than white—while still serving as a reservoir of the faith we all hold in the Texas version of the great American dream. 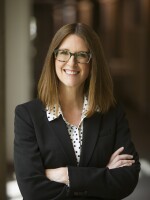 Krys Boyd
Krys Boyd has been host and managing editor of KERA-FM’s flagship midday talk show Think since 2006. Krys began her career along the U.S.-Mexico border, working simultaneously at radio and television stations as a reporter, anchor and news director. A graduate of TCU, Krys returned to North Texas in 1999 to serve as News Director for Broadcast.com, and later Senior Producer of Broadcast News at Yahoo.
See stories by Krys Boyd
The best stories from KERA sent to your inbox.
SUBSCRIBE
Related Content