Veralyn Williams knows that path to citizenship Mara was reporting on intimately. Williams grew up in New York City. Her family moved there from Sierra Leone when she as an infant and she always thought of herself as an American, through-and-through. But as a senior in high school, she discovered the truth. Not only was she not a U.S. citizen, she didn't even have a green card.

That's a story she told back in 2005 as part of WNYC's Radio Rookies program.

VERALYN WILLIAMS, BYLINE: Though I've lived in America all my life, technically it feels like I don't exist. I never thought I'd have fewer rights than my younger sister and brother who were born here.

UNIDENTIFIED CHILD: You are?

WILLIAMS: I am different 'cause I'm not a citizen like you and Lois are.

: So, just get the green card.

CORNISH: Now, Veralyn has this follow up about her quest to become officially an American.

WILLIAMS: I was an anxious teen ready to grow up before my time. I needed a green card but didn't have one, so I was beyond frustrated. My life felt out of my control. Here I was working hard in school, dreaming of becoming the modern day Zora Neale Hurston, and I couldn't even get an afterschool job at McDonald's.

So I began asking my parents difficult and even taboo questions.

So to clear it up: what's my legal status right now?

UNIDENTIFIED MAN #1: When I got my green card on the Suspension of Deportation, something happened which I don't really know, and they told me that I had to apply for you guys.

WILLIAMS: And when did you eventually come to America?

WILLIAMS: What was that form that you filled out?

WILLIAMS: Do you think that I'm not grateful for the things that you and dad do for me?

UNIDENTIFIED WOMAN #1: I think you're very ungrateful because you're not aware of what some other people go through.

WILLIAMS: All those questions eventually led me to my congressman's office. And I was finally able to see that path to citizenship everyone is always talking about.

My dad applied for political asylum and became a permanent resident, so he was able to sponsor me. And I just had to wait. Two years later, I got my green card. I can take my dreams off pause and achieve world domination.

(SOUNDBITE OF A BROADCAST)

(SOUNDBITE OF A BROADCAST)

WILLIAMS: Being a permanent resident was everything I'd prayed for. I could work as many as six jobs at one time. And I finally got to see Sierra Leone.

WILLIAMS: I became eligible to apply for citizenship last year. But that $680 application fee made me put it off six more months. So I saved, applied and, in December, I got a letter from the Department of Homeland Security giving me my citizenship interview date.

In case you can't tell, I'm excited. I'm contemplating all the ways my life is going to change once I become a citizen. I'll be able to vote and travel to Europe without having to spend two days pulling together a visa application. But I'm not really sure if who I am will change.

UNIDENTIFIED WOMAN #3: What did the Declaration of Independence do?

WILLIAMS: ...and like many Americans, I haven't exactly brushed up on my civics since middle school.

UNIDENTIFIED WOMAN #3: I was about to say it set the slaves free. But I think that's the Emancipation Proclamation.

WILLIAMS: But to become a citizen, you have to study a hundred facts about U.S. history and government. So I tested some of my American-born friends.

How many U.S. senators years are there?

WILLIAMS: There are two per state.

WILLIAMS: I'm going to need you to know there are 50 states in America.

WILLIAMS: No. What's the name of our current speaker of the House?

WILLIAMS: So the speaker of the House of Representatives now, what's his name?

UNIDENTIFIED WOMAN #4: It's a guy?

UNIDENTIFIED WOMAN #4: This is so embarrassing. People are going to hear this, right? Should I think about it some more?

WILLIAMS: I mean, I guess that's (unintelligible), you would not be a citizen of the United States.

UNIDENTIFIED WOMAN #4: That is a fact.

WILLIAMS: Well, I wasn't. So that means I have to study.

WILLIAMS: Despite being a little shaky the night before...

WILLIAMS: I passed my test and get a date for my Naturalization Oath Ceremony.

Before my swearing-in date, I go over to my parents' house for breakfast. And while we're eating, my dad says...

UNIDENTIFIED MAN #1: At least it made you a better person. It made you not take things in America for granted.

UNIDENTIFIED WOMAN #6: What do you mean not having...

WILLIAMS: My sister who was born here asked him to clarify.

UNIDENTIFIED MAN #1: Yeah, it made Vera a better person because there was a time when Vera wanted to work and she couldn't. For you, you were born here and you take those things for granted. But when you have to...

UNIDENTIFIED WOMAN #6: Does that make me less a person?

UNIDENTIFIED MAN #1: No, it doesn't make you a lesser person. But when you don't you have it, yes - it does make you less appreciative.

WILLIAMS: I hate to admit it, but those years of working off the bucks for $5 an hour at a job I really needed means I don't take for granted the opportunities I have now. But I still wish I could've learned that lesson another way. 7/26 on the day I'm going to become a citizen of the United States. Finally, the day is here and I put on my red, white and blue dress and go to the courthouse, where unfortunately I wasn't allowed to record or take pictures.

They jammed 281 of us into a courtroom, ready to give up our green cards and take our oath to become Americans. The ceremony took hours, but it wasn't until I walked out with my citizenship certificate that I finally felt claimed. Dear fellow American - I mean, the president even wrote me a letter - we embrace you as a new citizen of our land and we welcome you to the American family.

And it's signed Barack Obama. I went back to the Brooklyn Court. How are you?

WILLIAMS: Thank you. To meet Judge Robert Levy, the one who swore me in that day. How do you think the people that became citizens that day are changed once they walk out the door?

LEVY: Well, that's something I always wonder about. The citizenship, I think, brings with it a different sense of self and I don't think that anyone can predict for someone else how that will change them, but I'm pretty sure that it will change them.

WILLIAMS: He's right. It's difficult to put it into words but I feel different. I'm an American and that gives me authority to define my sense of self, whether it's pulling on my neon red, white and blue microphone and asking the tough questions or perfecting my favorite Sierra Leonian for my two-year-old niece and little cousins. Or just choosing both, like most Americans do. For NPR News, I'm Veralyn Williams.

CORNISH: Veralyn is now 27. She lives in Brooklyn and works as a multimedia journalist. Her story was produced by Kaari Pitkin of Radio Rookies at member station WNYC. Transcript provided by NPR, Copyright NPR. 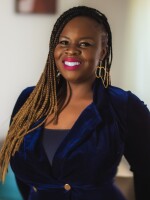 Veralyn Williams
Veralyn Williams (she/her) is a Peabody and Edward R. Murrow award-winning journalist who has been asking hard questions about our world since she picked up her first microphone in 2004. Now she brings her skills (and ears) to her role as executive producer of programming at NPR.
The best stories from KERA sent to your inbox.
SUBSCRIBE